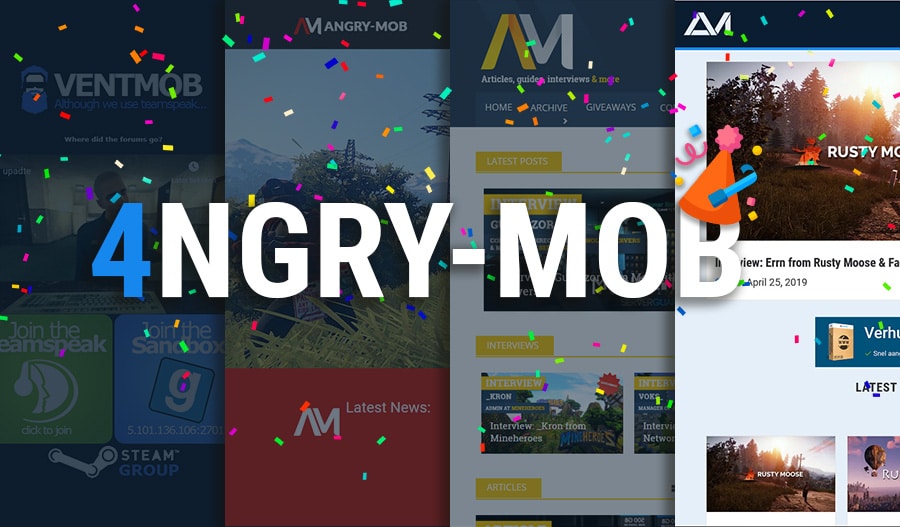 Put on your party hat because its our birthday! To celebrate this occasion we are throwing in MORE games in the upcoming giveaway which will go live this Friday! Be sure to keep an eye on the giveaway page or join our monthly newsletter to get a notification when it goes live. Since it’s our birthday, I also thought it would be fun taking a small trip down memory lane seeing Angry-Mob used to be quite different than what it is nowadays!

I hate bringing up old communities, especially Ventmob seeing it has been ‘revived’ and talked about many times these past years (including myself). Still, I can’t leave this out since it led to the creation of Angry-Mob (funnily enough, the “mob” part of the name has nothing to do with Ventmob).

Two/three years after Ventmob’s closure I contacted some of the old admins and teams of said community. This resulted in an unplanned reunion/revival within two weeks. It was great! Almost all of the members were back and we had the server full (64/64) again for a good couple of days. As expected, this was a short time thing seeing the gamemode was outdated and everybody had gotten older and moved on.

For us (Tori1157 and myself) this was only the beginning. Instead of letting the name and community die, we decided to move on with the name (with approval of the original owners of Ventmob). During that time we hosted multiple Garry’s Mod servers, a successful Reign of Kings RP server (whitelisted), Minecraft server and started on the BourbonRP & Manhunt projects (new game modes). Around early 2015 we noticed that we didn’t want to keep using the Ventmob name since it was kinda blocking our development. We didn’t want to change what Ventmob was back in the day and leave it as a good memory for all of us to cherish. This resulted in.. Angry-Mob!

Late April 2015 we officially launched Angry-Mob as a “open to all Teamspeak” community. The reason for that was that we loved jumping on Teamspeak and just play games with each other. Why not get more people in on the fun right? Our first adventure was Arma 3. After having played that for a while we decide to launch a server and attempted to run with a regiment kinda group. This was “way to try hard” for us since we were mostly messing the “trainings” up with our shenanigans much to the dislike of our fellow squad members. (Sorry Cammy)

Later on we were playing on a Rust 10x server called Razor Rust (yes with an “o” haha). After getting admin status myself I noticed the lack of leadership and shady donations the owner was accepting from its players. This resulted in Angry-Mob launching its own 10x server. This was by far our most successful project to date!

Somewhere in 2016 we closed our 10x server since it was draining all of our time and energy (gotta love waiting every Thursday for Oxide to break). After the success of the server we noticed we were heading in a direction that we started to think more of ourselves (the staff) on what we wanted to play instead of catering to the ever growing demands of the (mostly 10x players) community. With our roots in Garry’s Mod, we launched our own TTT server and the “Something else” server which hosted various gamemodes and various other “weekend” servers (The Forest, Open TTD, Minecraft etc). During this period we noticed community activity was lacking and we decided to put the community in “The Freezer” which ment we were taking a break basically. During this time Tori1157 decided to step away from Angry-Mob for a while and focus on other projects. For me however, this break ment time to think of Angry-Mob’s future.

After months of brainstorming, planning and building I re-launched Angry-Mob (revamped) in February of 2017. Instead of running gameservers, I focused on writing articles, guides and interviews aimed at other communities out there. This resulted in Angry-Mob’s current form. During the adventure we always have the occasional project pop out of nowhere much like RustRP. This roleplay project within Rust started and ended in 2017 with moderate success. Thanks to the many hours Tori1157 put in to the project (yes, he returned by then), we were able to provide many players with hours of fun. This was also the last gameserver Angry-Mob has run to date.

Right, I am just going to use the wall of text I wrote above this paragraph and try to remember names with all of those servers. It’s impossible to thank everyone personally so if I forgot your name (which I will), shame on me and let me know! To start off:

Besides the lifelong memories, thanks for giving that little boost of players/members during the start! Also sorry for using the Ventmob steam group to advertise for Angry-Mob in the past 😉

Big thanks to our moderators/admins (Thorlac & that dude who had a Jack Russell dog, forgot your name sorry). Also a huge thanks to “the mad king” King Sedric for providing us with the best roleplay!

By far the peak of game activity for the admins. You guys were busy fighting off admin abuse accusations, handing out donation rewards (Platinum III anyone?) and overall saltiness from 70% of the server population. We DEFINITELY couldn’t have done it without you guys.

We all know roleplay is ROUGH to administrate. It goes without saying that this server would not have worked without the help of: Shadowka, Alcatraz, Girugamesh, Ziro, Crime, Snorlax. And ofcourse a HUGE thanks to Tori1157 for managing the spiderweb of plugins (both custom and third party)

Last but certainly not least, everyone involved with Angry-Mob in its current form. Many thanks to:

Here is to four more years!