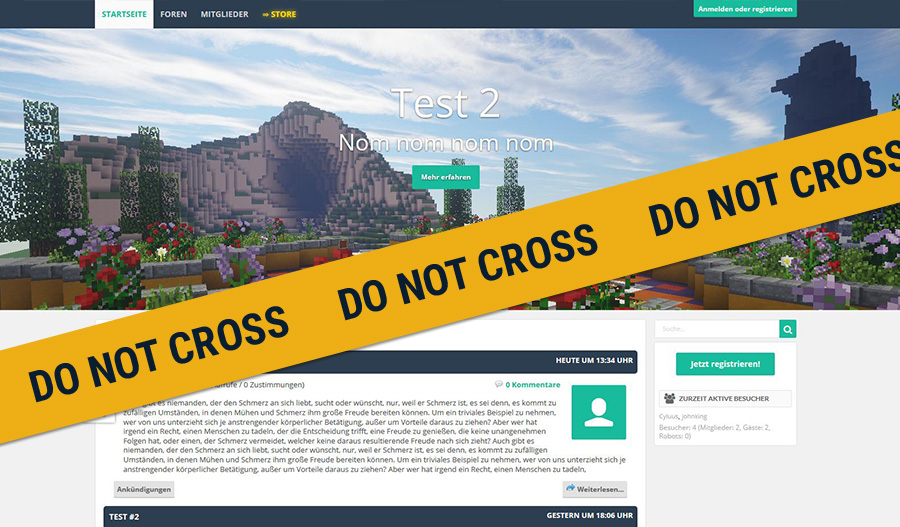 Every once in a while I just like to vent about something. In the past we had (what should have been) “the weekly vent”. Well let’s be fair, only four of those articles ever got published. And guess what? None of them were actually posted on a weekly basis *laughs nervously. To make things up with you guys I will be doing a bi-weekly vent from now on*

We are starting off (again) with communities/servers using cracked/nullen software. Great move dumbass!

Hey @everyone join my Minecraft community!

Timmy likes Minecraft. No really, he REALLY likes Minecraft. Besides all his toys he obviously loves playing the game. So much that he wants his own server. Since Timmy is inexperienced, he doesn’t check out third party server providers, but gets it from the source. *KACHING* says the cash register over at Mojang/Microsoft. Timmy just rented his first Minecraft server

With great excitement Timmy messages all his friends inviting them to his server. After a couple of fun sessions with his friends they decide to give the server a name and build a community around it. Boy oh boy, the fun these kids are having is immeasurable.

Billy (14), his edgy friend from school, also caught wind of this. Billy says he is part of an up and coming eSports team and whenever he plays on a roleplay server he likes to play the bandit and RDM players. OW! By the way, I heard someone say he got caught recently using an aimbot in Apex: Legends, the game all the cool kids play. But hey! Who am I right?

After seeing a couple of people on Timmy’s server he started sending him messages. “Hey Timmy, you need a forum and plugins for your server. I’m a coder”. Timmy, the good guy that he is, agrees and let’s Billy in to the team. This is where Timmy’s server went downhill.

Welcome to our forums running on XenForo

Since Billy knew where to find his Apex hacks, ALLEGEDLY!, finding a nulled version of XenForo wasn’t a challenge. I mean, almost all Minecraft communities use XenForo as their website/forum platform right?

After installing the forums he started downloading premium themes from the same website. Yes, you guessed it,  ripped premium themes. After installing around 20 of them on his forum he finally found a cool logo on Google and decided that it will serve as the communities logo. BAM! The design is finished. Last thing on the list: too many plugins. Thankfully there is a board on said website (which is actually a forum) where you can find almost all nulled plugins, including shiny backdoors! Billy, the coolkid that he is, installed all of them. Damn, they look so cool!

In the meantime, Timmy was hard at work at learning how to install and activate plugins on the server. While he was telling everyone in Skype (lol) about his work, Billy interrupted him with a loud sigh. “Dude, I can make these plugins within a day. Let me do it!”. Timmy agreed since he is a bit insecure about being in this position by now.

Edgelord Billy instantly went back to said website where he found another shiny board full with premium Minecraft plugins! “I am a hacker” he thought while he was downloading all the plugins. “Stupid slow ass computer” he said while he was waiting longer than usual for the files.

After a while he had a great collection of 50+ Minecraft plugins including: ProQuest, BeerSpigot, Printer mode and more. (I have no idea what all these plugins are, I am just Googling some examples). He loaded them on the server, which took forever to load for some reason, and they were ready to play!

Clickbait, their server is shit. Thanks Billy..

Using illegal obtained software for something public is a big no. Besides it being a security risk, since you have no idea how the software has been cracked, it also can lead to (financial) problems. When someone suspects a forum platform, in this case XenForo, is being used without a license, they can just contact XenForo. Easy as that! They can quickly verify your domain to see if there is an active license. This is just one example. Besides that, you look like a real dumbass when its noticable.

PS: I have nothing against XenForo. In fact, I think it’s a platform with some great features.