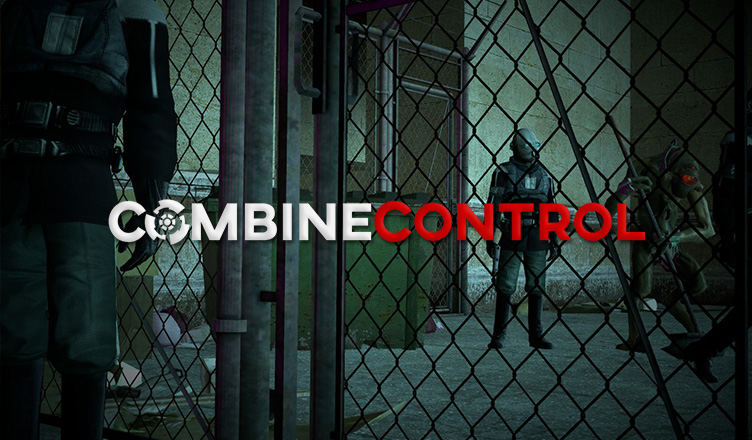 Greetings Hanm13, thanks for doing this interview with us! First of, how are you doing today?

We’ve had a fantastic day, with a lot of polishes for the Black Mesa release.

Can you tell me a bit about how and when you guys started out with Combine Control?

Our community was founded in the middle of September, 2014 as server inside of a local Garry’s Mod community called Garry’s Mod Israel. A few months later, we separated the
server from the community and created a unique website and forum, and from that point CombineControl became a worldwide community.

We got here thanks to the Olympus, the CombineControl founders.
We are a bunch of friends that are located in Israel and worked together as a team to build the structure of the community.

Did you have any experience running different servers/communities prior to Combine Control?

We have previously hosted various game servers in the years leading up to CombineControl. Among them are:

When using the words roleplay and Garry’s Mod in the same sentence, most people think of DarkRP. Just to be clear, what’s the difference between DarkRP and Combine Control besides the setting?

The difference between DarkRP and “Serious Roleplay” is the extent of playing the role. In DarkRP, your goal is usually to play the role like a videogame; You make money, get guns, and rule the streets. In a serious setting, however, your goal is to actually act as that character, as if you were in a story.
The players get to meet each other in character and play out detailed scenarios, which allows for a deep and immersive experience that goes beyond just playing a video game.
Most roles besides the standard citizen will require you to fill out some form of application, which aims to ensure that there will be a good quality of roleplay among the ones entrusted with that position.

What should a “fresh” player expect when they join for the first time?

When first joining the City server, you will see a short introduction of the gamemode, map and atmosphere. After that, you will be able to create your character. Your character will start out as a citizen, and you can then roam around the city and interact with other people

The world of Half-Life 2, which CombineControl takes place in, is a dystopia in a not-so-distant fictional future. Earth is under the control of the evil Universal Union, also known as the Combine. Their volunteer law enforcement is tyrannical, and most who join them eventually end up as brainwashed soldiers. In this dim future, there is still a hope for freedom, which is pursued by resistance fighters throughout the world. There is constant tension between the Combine-controlled cities and the rebel forces that hide outside of the city’s walls.

You have the choice of being a loyal citizen, or a rebellious criminal. If you decide to support the Union, you will be rewarded with many privileges such as better food, living conditions, and exclusive supplies that are not distributed to the average citizen.

If being loyal is not for you, joining the resistance is a dangerous, but potentially worthwhile choice. Most rebels only dare to enter the city for carefully planned incursions, so meeting an insider to help you can be difficult. However, if you manage to escape the city and get to the Outlands from Half-Life 2: Episode Two, you will find an area controlled by the rebellion.

If you hate both the Combine, the resistance and other citizens in general, there is one more option. You can choose to become a freelance criminal, mugging and fighting anyone unfortunate enough to cross your path. This is not the most sane life decision, but the payoff can be interesting.

You can make significant advancements regardless of who you side with. The Combine offer heavy roles for loyal citizens, such as their Civil Protection law enforcement, or high-ranking political figureheads to ease the population.
Meanwhile, the rebels are always looking for figureheads of their own. Becoming a heroic rebel that leads others to victory is a common goal, and with enough charisma and skill, you can accomplish just that, following in the footsteps of famous characters like Gordon Freeman or Barney Calhoun.

Should you directly join the Outlands server instead of the city, you will have the option to create a character there too. This character will start out without a citizenship, also known as a refugee status. Refugees are hunted down by the Combine, but you can find shelter with your fellow rebels in the Outlands.

You can, of course, create multiple different characters which you can change between at your convenience. This allows you to try out whichever role you want, including those on opposite sides of the conflict. You can edit your character details in-game, and our website allows you to log in and manage them remotely, among other things.

We highly discourage the creation of “stereotypical” characters, with crazy military experience. We are very fond of passive atmospheres in our servers, where daily conversations between the hungry citizens can give birth to powerful resistance groups. We like to put development over combat.

Maintaining a good atmosphere within the community is important. Are players able to become staff members? if so, how does this process work?

Yes, players have the ability to become staff members. In order to join our team, they have to apply for a staff position on the forums. Of course, they have to meet some requirements which include being 16 years or older, having no previous bans on the servers, and being part of the roleplay mentoring team for at least one month.
We also allow players to bypass these requirements if they present a good enough case. Some of our best staff members are those who have learned from their mistakes and become better players.

We definitely take an extremely respectful approach to our staff team. After all, they are the ones that keep the server in line, and our Senior Staff and High Management are managing our creative teams. Players can also apply to these, putting their creative input in to make lore, loading screens and many other things. The staff team is not the only role that can maintain an atmosphere in CombineControl.

Recently I got a pop-up from one of your steam group announcements related to Black Mesa RP (BMRP). What can you tell us about this new project?

In tribute to both the setting and older roleplay servers, you will be able to take part in roleplay within the Black Mesa facility of Half-Life 1. The Black Mesa Roleplay server will be a new, third player-accessible server for our community, and we invite you to participate in the many new roleplay opportunities it will create. Here, you can both try out new character ideas and play the backstories of your existing characters, in a time where the Combine invasion of Earth was avoided, after the Resonance Cascade was avoided.

The server will finally open on the 19th of October (19-10-2018) – 18:00 UTC, after which you will be able to join the server and apply for its roles.
In order to play a Black Mesa Roleplay flag, you must have a new character created on the BMRP server. You cannot carry these roles over to the standard CombineControl servers due to the obvious time paradox.

You are free to create a Black Mesa period version of your existing characters if you wish to play them here, meaning you have one character on both server types. Due to the alternate universes of both these servers, Black Mesa backgrounds aren’t able to be transferred into our Half-Life 2 roleplaying servers. This is simply an alternative version of your characters.

Black Mesa Roleplay will feature its own new forum sections, including flag application subforums and in-universe discussion. The server will also feature new content appropriate for the setting


“Be open to change, and don’t be too hard on people who make mistakes”

Will BMRP run on a modified version of the Combine Control gamemode?

yes, the server will have its own system based on the CombineControl gamemode. It will share its overall theme with the standard CombineControl mode, but will feature unique items and character flags which cannot be produced on the other servers.

How can people participate in the upcoming Black Mesa RP beta?

We are hosting a competition at our forums where the top five players who refer their friends to CombineControl will be given special early access to Black Mesa Roleplay. There are additional prizes for those who refer high amounts of players.

Let’s talk development real quick. Can you tell us a little bit more about the Combine Control gamemode and how it differs from other game modes out there?

CombineControl was originally created by Disseminate as a simple alternative to some of the other Half-Life 2 Roleplay gamemodes popular in Garry’s Mod. After we bought into the schema and established our server, we have been adding hundreds of our own unique updates to the mode which has brought us where we are today.
We maintain an active content and development team that attempts to keep adding new appeal to the mode and ensure a better roleplay experience.

You guys working on anything special/new currently besides Black Mesa RP?

We’re not working on anything big besides Black Mesa right now, but we frequently try out new ideas for our servers. This ranges from balancing fixes to complete overhauls of our mechanics.

We also have active content and media teams, providing us with MANY new aspects to enhance the experience within our servers. We have an extensively custom lore, and we hope to keep increasing it’s depth and detail!

What are some of your fondest memories which took place within the community?

City 45 has a special place in many players’ hearts thanks to its successful original run in the community. It was a simpler time back then, with real and righteous rebels who were ready to shelter and assist anyone who came to them in need of aid. Many players started their time on CombineControl there, which is why:
The Combine nuking of City 45 is not easy to forget. That was the first time we moved to a map like Industrial 17, and saying goodbye to 45 was an interesting situation. The mad dash for rebels to escape the city was quite the bloodshed, but most made it out alright and quickly settled in the hidden underground of City 17.

A player-orchestrated antlion invasion of City 17 is remembered by some players vividly. It turns out that any one rebel with a pheromone pod could potentially create the next Nova Prospekt catastrophe. The fact that every antlion was also being controlled by a player made it quite impressive. That kind of organization for a wildlife player role took the Combine by total surprise.

Starting a community can be tough in the beginning, especially for a roleplay server. Are there any tips you can give to starters?

How can new people join your server & community?