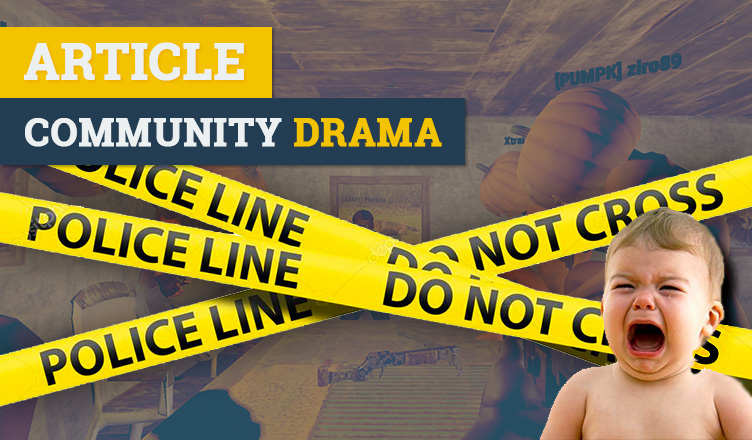 Oh boy oh boy.. we have reached a subject that many people label as “the cancer” of communities being, community drama. Never have I had to write an article around a subject this hard. I am not really sure where to begin but… here we go.. *puts on his helmet, swimming vest, protective gloves and condom

Community drama can range from small in-game quarles to real life conflicts with actual consequences. In this article we will (mostly) talk about the digital drama.

Problems within the household

Most community members see their community as a second home in a way. Much like every household problems/drama will occur, no matter what the policy is. Therefore you as staff better prepare yourself to control the situation instead of trying to prevent people from stirring up some fresh drama, because it will happen.

Much like a middle aged dad who says “no you can’t go out tonight” to his teenage son/daughter who goes anyway, you can’t be on top of everything. There is a limit to your powers when it comes to controlling your community, so don’t pretend you are in control of everything (don’t worry I’m not mad)

Drama caused by players/members is mostly caused by the same people. Every community has someone/members that  just attract or cause drama. It’s both up to the rest of the community and its staff members on how to react to this person. Don’t give him/her fuel to cause drama and don’t respond to “openers”. The problem with these people (inb4 What do you mean “these” people?!) is that they tend to motivate others to join in on the “discussion”. Don’t get me wrong having good discussions within your community is great and are great for community bonding, but one-sided crusades aren’t. Be sure to not give in as an admin, don’t give them something to keep quiet since this will catch on, before you know it you will be the salvation army and have to hand out stuff to everyone.

This is a tricky one.. my first reaction would be “Demote the sucker!” but that is easier said than done. Whenever a staff member causes drama he/she should have a chat with the rest of the staff since a staff member should always be calm and neutral when communicating with the community. Just because you are wearing a tag it doesn’t mean you are unbreakable. The best way to do something about a staff member who is causing drama as a player is work together and collectively report this person to the head admin/community manager or owner (this doesn’t mean that everyone should PM the person).

Now.. if the owner is causing drama then… well he’s basically fucked. By creating drama as an owner you will lose your members, pollute your name and basically kill your own project.

How to approach drama as staff

Don’t! just run away as far as possible! no just kidding. There is a really big chance that the person(s) causing the drama are known within your staff team. Having this knowledge will help you in the process. Whenever you step in: be neutral, don’t judge/punish (unless there is proof) and try to end it as quick as possible. Before jumping in, see if your approach will cause collateral damage, since you don’t want your community(name) to be damaged because of the “shitstorm”. Your communities image can change within one evening if you’re unlucky, don’t let this happen to you.

You want to hear a little secret?

Before I continue I want to say that drama is a waste of time and should be countered since it can damage your community (severely). Right now we’ve got that over with! Over the years I have seen/been involved in community drama as well, and looking back at it… some of it was pretty funny (and stupid).

If there is interest I am willing to write down some of the drama I have encountered over the years (no names). Also, I would love to hear your stories! If you have a good one feel free to post them in the comment section. If you have a story that you think can get published on the website then send us an email! Would be funny if we could publish drama stories on a weekly basis *goes in for the high five