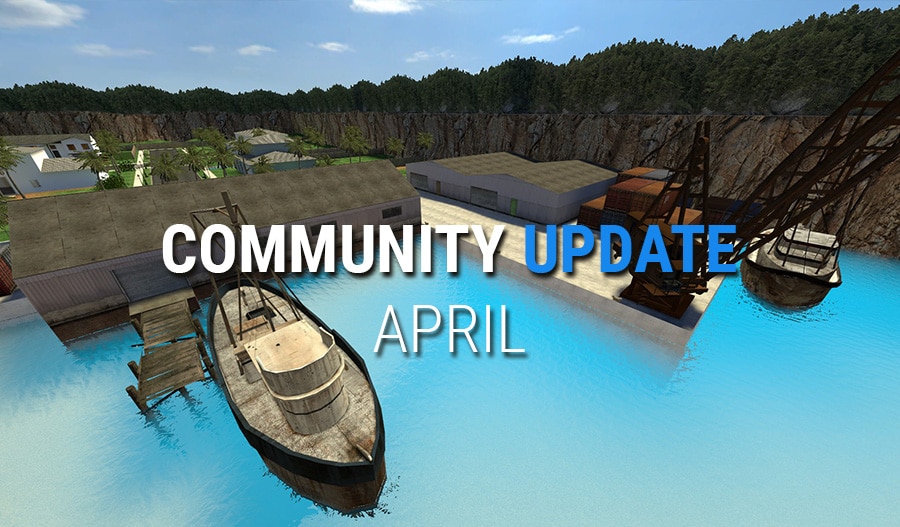 With currently 44 interviews published (with many more to come), it’s hard to keep track of all the communities that are featured on our website. Via the monthly community update, much like Rust does theirs, we try to keep everyone up to date with what’s happening within our ever growing bubble. Besides including news related to featured communities, we will also include interesting news/announcements from various communities. This month news from: Drew’s Community (Garry’s Mod), Fadecloud (Minecraft), Thriving Ventures (Monolith & Server Guard), VolitionRP (Garry’s Mod), Rebels Games (Space Engineers) and Werwolf Gaming (Garry’s Mod).

Drew’s community has been pushing both their Garry’s Mod roleplay servers forward. On CrewConflictRP (their DarkRP gamemode) they recently changed to a new map called Evocity DC Tropics. Thus far the response from the community has been great. For instance, you can take your boat out to an island and base on it. On top of the map change they also converted all their weapons to M9K and released the Easter event. Now you can play as a bunny thief, collect Easter eggs which you can cash in for printers and the printers are Easter egg printers!

On the other side we got StarWarsRP CloneWars. Here they have focused lately on the average player. They have added new aircrafts on a new base which makes starfighter combat “so much more fun”. Most of the regimens also received new weapons from “Battlefront 2” which looks better and sounds better. “Good gunplay is important”.

A big update labeled “Prison Reset – PayPal and $1,500 In rewards – Futuristic Themed“ has gone up on Fadecloud’s forum. Today their Prison server will get a fresh reset with new additions and modifications. “Next season you will see brand new builds from spawns to mines and a bunch of old features that you guys loved”. Just to name a few new features: pets have been added to the game, rebirth upgrades and added cells & clouds.

For the first 6 weeks of prison you will receive the following rewards weekly:

Read all about it

Thriving Ventures, the company behind Monolith roleplayer, Monorust and Server Guard (administration tool for Garry’s Mod) recently changed up their corporate identity. Now this does not impact any of their projects perse. However, I have a good feeling this is a lead up to something new and will probably catch us off guard.

I’m keeping my eye on you Thriving Ventures 😉

In our previous Community Update we mentioned that Volition RP was looking for testers to test out their Experiment (gamemode) server. Well look no further, the guys have already called it quits. While the project looked very promising (hence us providing them with a free server), they too weren’t able to break the “Experiment curse”. The gamemode just seems to die out within X amount of weeks.

I believe Volition RP now holds the record for shortest Experiment project (live) to have existed. On the 6th day we received word that they were calling it quits. Quite an achievement! *feels sad

The guys over at Rebel Games have released their new update 1.1.1. This patch has  introduced major changes to their world. Besides “fighting” the performance issues they have added/made changes to:

Next week they will be releasing another update (1.1.3) with even more content!

Harland from Werwolf Gaming recently announced the launch of their DarkRP server after being in development these last few months. Since launch day the server has been packed, so it’s safe to say the server is already a success!

They have setup a Google Doc containing all the information about the server. To sum it all up (as best as I can):