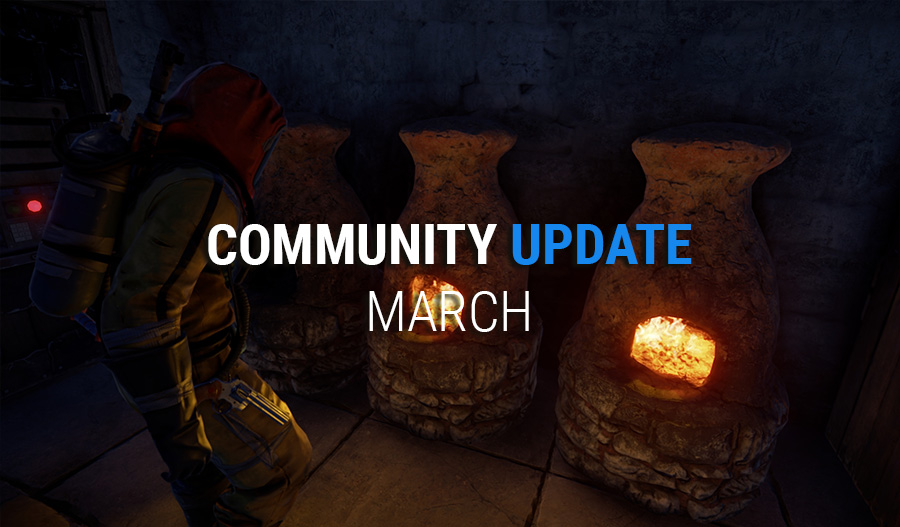 With currently 38 interviews published (with many more to come), it’s hard to keep track of all the communities that are featured on our website. Via the (monthly?) community update, much like Rust does theirs, we try to keep everyone up to date with what’s happening within our ever growing bubble. Besides including news related to featured communities, we will also include interesting news/announcements from various communities. To start things off, here are some updates from Perpheads, Dead Zone, Volition RP, Elite Ark, Monolith and Survivors.gg!

Besides all the recent updates and additions to the Perpheads server (PLPD revamping & new vehicles) , the Chemical table update is definitely worth mention in this community update. After many months of hard work from the entire development team, they are pleased to announce that the Chemical Table update has been released. This has been one of the more complex updates, stretching some of the limits of what is possible with the engine, with complex and dynamic models that can be added to and adjusted on the fly.

Dead Zone replaces one of their servers – 7 Days to Die

Over at Dead Zone they retired their Alpha 16.4 server and replaced it with a Alpha 17.2 Vanilla Nightmare server. A big difference is that on the new server the Zombies will run all the time, so watch out!. Like Libby said in their announcement “For those of you who want more of a challenge…”.

Their main, modded 17.2 server is still running of course, Robfly told us. “Expect lots of player as usual”

Drewbie informed me what’s been going down recently within Drew’s Community, and boy oh boy, have they been busy! They have just released their TTT server which is using M9K, PointShop2 and a ranking addon to check your ELO. The server is, as Drewbie told me “Playable and public, but we like to consider it still in development because we want to improve based on feedback”.

Besides their newly launched TTT server, they also recently revamped the UI for both their DarkRP (CrewConflict) & SWRP servers, switched weapons pack on their DarkRP server (from CW 2.0 to M9K) and are currently working on a new edited version of downtown (map). This version will have a bigger ocea with islands and a miami style harbord.

To top things off, they recently “upgraded” their servers to a new host being GMC.

Read up on all the announcements

Monolith servers recently launched their Rust server as a surprise for its community. They decided to launch a server on Rust as trial to see how many of you would enjoy it. It is meant to be a well-balanced and stable modded (5x) server. With success they would love to create something more detailed such as adding custom plugins, more servers and several upgrades. With a healthy player population (40 -100), you can expect some good fights in this bi-weekly wiped, 5x modded server.

Another thing worth noting regarding Monolith is their upcoming two year anniversary this April. I wonder what they’ve got up their sleeve this time!

Elite Ark launched an Outlaws of the Old West server

Besides their Ark, Atlas and upcoming Rust server, the guys over at EliteArk recently launched their Outlaws of the Old West server. Since the game is still freshly dumped on Steam (early access), the server settings are using mostly default settings. Come to think of it. Does outlaws actually have a server config file? hmm.

Right, so if you wanted to try this game out, be sure to drop by their server and experience the game the Elite way. You can find the server information in their Discord.

After many hours spent of fixing and altering the gamemode, the guys over at Volition RP are looking for testers for their upcoming Experiment (Clockwork schema a.k.a. Phase Four) server. With a release date “some time in early April”, they can use all the help they can get. Note that the testing will be done behind closed doors and will be running on a custom map (edit of the classic map rp_c18_v1) in the near future.

So if you want to check out the gamemode before it launches or help them find bugs, head over to their Discord and/or Steam group for more information.

Recently the Discord invite competition ended over at Survivors.gg. All the contestants had to do is invite as many people as they could to their Discord via a unique Discord invite link. Thanks to Skinbay and Icedhost, they were able to provide their winners with some fancy Rust skins and Rust game servers (2x two month Rust server). Grats to all the winners!

To wrap it up, Aspire announced the they will organize more competitions in the future, so keep your eyes open!