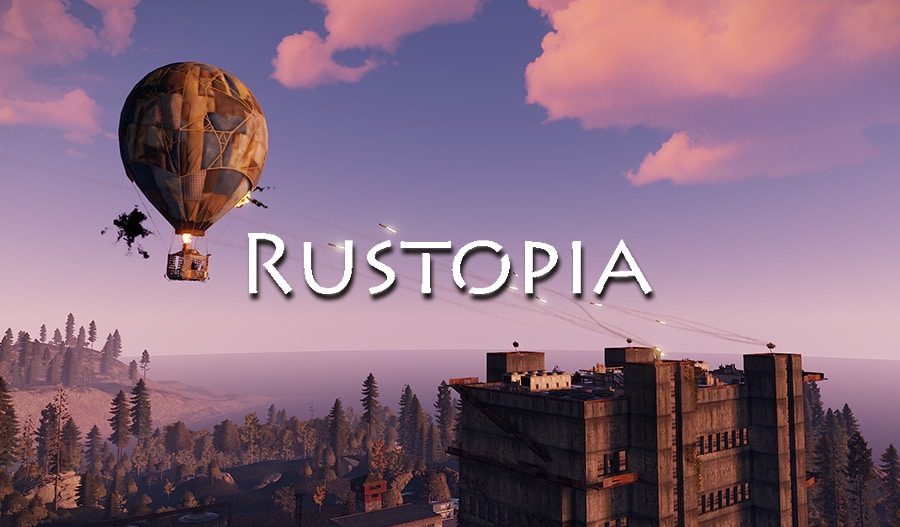 The best way to celebrate easter is by cracking some skulls with your easter egg made of stone. All the reason to have a chat with SCE_Ghost, one of the four administrators of Rustopia. This ‘official’ listed Rust community has been active since early 2015 and currently has servers up in both North America as Europe. For some reason we have never published an interview with an ‘official’ Rust server. Obviously I was eager to hear his story on what that actually means and how Rustopia obtained this status. Let’s go!

Hey Ghost! Cheers for doing this interview with us. First off, how are things going?

Awesome! Thanks for having me.

Can you tell us a bit about yourself and Rustopia?

Intro to doxxing lol. I’m just your average guy, nothing to exciting. I always laugh when someone says “how old are you” insinuating I’m some angry kid in a basement. I’m a family man and over the age of 40. Always been into computers and gaming. I started playing Rust in legacy (best version imo). Had a server for a bit then Facepunch announced the new ver of Rust, I bought a vps and started Rustopia, come to find out Rustopia was a semi popular legacy server, I came up with the name due to a tv show at the time called Utopia though hmm Rustopia, so completely unrelated, well the owner of that server never started a server for new rust so I figured it was fair game. It took a good year of hustling to get it running a solid population

Did you have any community experience prior to Rustopia?

I started the gaming clan, SCE back in 1997 when clans were “cool” and used forum boards with fancy intros lol. It grew to about 300 members but over the years the clan lure died off and memberships dropped, we never really pushed recruiting after that but even today we are still around with a group of 30 or so.

“we were a popular server before being official”

What’s the difference between community and official servers within Rust?

It’s really just a tab listing, Some would argue population increase but we were a popular server before being official so it’s hard to say.

Something a lot of communities are dying to know. How do you get official status in Rust?

I see this alot in the Rust Discords – Simple answer from Facepunch “Dont’ Ask”. We never assumed we would be offered it at any point, I also had some head butting with a few of the devs around that time. I got a DM from Ali asking me to put an extra line of code in our startup file. I was a bit shocked and flattered, my only question was “What’s the rules”? He replied “Don’t be a dick”  Fair enough and here we are today.

What kind of perks do you get for being an official Rust server besides the listing in the official tab?

There is no “extras” at least not for Rustopia.

You guys host servers within Europe and North America. Did you did this from the start? or was this something you decided to do later on.

Since I’m in the US I originally started there, the idea of the EU server came about a year later and I was talking with a great guy named Kulan about running EU for me, which he did a great job, he ended up leaving Rust and I took back the server full time. Just recently we added one more server in the US and EU.

Being cross-continent requires a varied staff team. Can you tell us a bit about your moderation team?

What can I say, these guys volunteer to be beaten up by one of the most toxic communities, I can never thank them enough for the help they provide.

What are the requirements on becoming part of the staff team? I bet the process is different from non official servers.

Facepunch gives us free rein on who we choose so the process isn’t different in that sense. Choosing an admin is a tricky thing, you need people you can trust 100%, I mean you’re giving the keys to the kingdom in hopes they don’t destroy it in an hour, same reason for youtubers that ask to make videos, it’s all the same powers. I don’t personally play on Topia unless its cracking at hackers, I could be 100% legit playing and someone would still call abuse, it’s just not worth it. For the most part if you want to play it has to be on an alt without admin powers, even then I don’t care for it.

Running a community has its ups and downs which in return can impact your overall morale. How do you keep yourself motivated?

LOL, I think all server admins go through that. There are days I have had my finger on the kill switch thinking if it’s worth it anymore. The hardest time is when you have a update that doesn’t play well with the server and player lose their minds, it’s always the servers fault no matter what. Also the part players don’t see is the continuation beyond sitting in front of the computer, my family suffers due to the amount of time I have to be around to monitor the servers and Thursday wipe days are a complete loss. However, the amount of positive time I get interacting with players banning hackers etc still makes it worth it, I get the occasional discord message saying best admin, keep up the great work, that always helps.

Rust still received a steady flow of updates and new content. How have these updates impacted Rustopia?

Since all servers take the same update it’s not specific to just Rustopia. To be honest Facepunch is genius in the way they run things, five year old game and player are still waiting for what’s out next month, I don’t think the updates are massive changes but just enough to keep the player base excited. For me personally I feel the direction has gone a different way then what I would have liked to see, I mean it’s called Rust, yet now we have scientist and chinook events. Facepunch is doing a great job development wise despite what some will say. In short, I got my $20 worth of Rust years ago everything else is bonus content, stop bitching..

Speaking of development, you guys currently working on anything new?

Nothing new to speak of.

Being an official server/community is a big achievement! Are there any other milestones/memories/fun stories that you would like to share with us?

LOL, best story I have was when FP announced Holmzys Law (announcement of item give for admins) this was to combat admin abuse. Now for me paying my own money to run a server should allow me to run it as I see fit, IMO if I needed to spawn in a sleeping bag so I can get back to a hacker base, then I should be able to without it telling the entire server. There are several instances that as an admin we need the secrecy. When they added Holmzys law I was a bit upset since I felt it was a punishment to an admin system that already didn’t have much to use and imo only created a bigger issue, if an admin wanted to abuse they could just no clip in a base and steal player items, or break a wall and make it look like they got raided (true abuse) So if I want to be an abusive admin I certainly would have been called out long before the law went in and I would have no player base. So this boiled over to slack and Garry was still apart of the show, my ranting got his attention and in that called me a f*cking c*nt, I wasn’t too familiar with the Eu lingo and we had some words. I later apologized and I laugh about it now. Garry, I’m still waiting on that fp coffee mug signed FU C*nt lmao.

We always like to close our interviews with some tips. Do you have anything you want to give to other (starting) communities out there?

OMG why would anyone want to do that? lol.. Umm seriously I would say think of something different, there are so many servers now that you have to do something to get noticed, stealing a popular server name or going in high pop servers chatting come to yours isn’t what I mean. It would be a hard go at this point not to mention the server cost factors, having a vps might work till you get 50 players but if you continue to grow server costs go up as well, be prepared to spend money and live in your server.