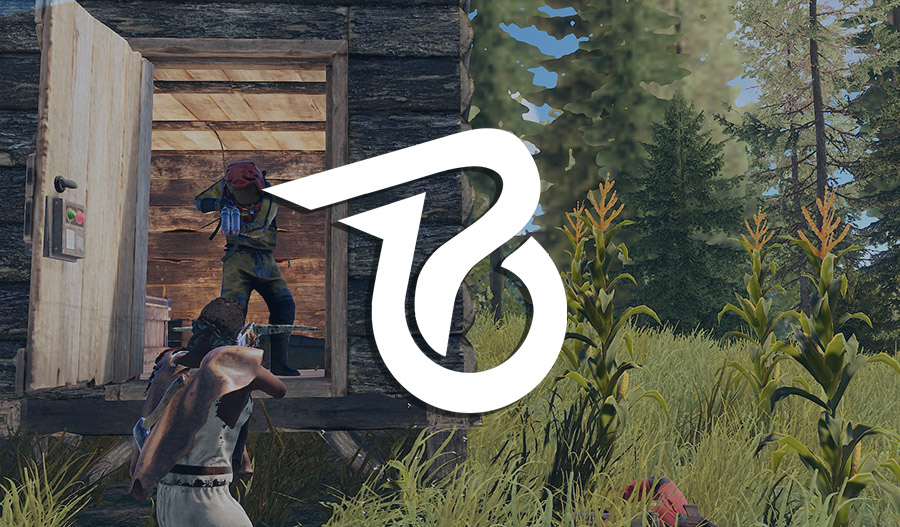 For some reason, I’ve been recently watching a lot of Rust videos (great idea for a lockdown binge!). One of the content creators that stood out for me is Blooprint. While I was watching one of his videos I thought ‘Let me just send him an email, see what happens. To my surprise, I received a reply the next day and here we are! Blooprint, content creator and owner of Bloo Lagoon, and I had a little chat regarding the do’s and don’ts of Rust, his Youtube & Twitch, plans for the future, and of course tips for (starting) content creators and communities. So without further ado, let’s get started!

Greetings Blooprint! Thanks for doing this interview with us, first of, how are things going?

No problem, thanks for having me. Things are going great for me! The support has been better than it has ever been before. It’s all I can really ask for.

Can you give us a rundown on how you got started back in 2014?

So a lot of people don’t know this but I used to be a Minecraft content creator, and I went by a completely different name – “Death Chimp.” I mainly played MCSG (Minecraft Survival Games) and uploaded my montages to YouTube. I had to be 11 or 12 years old at the time. I transitioned to Rust in 2016, and the second Rust video I had ever uploaded (Huge Armored Base Raid) was a massive hit, gaining over 50,000 views. I had less than one thousand subs at the time, so you can imagine how this affected me and my channel. I remember me and my school friends were freaking out seeing the numbers climb! It was only when I hit a couple thousand subs or so that I officially changed my name to Blooprint, as I thought that “Death Chimp” wasn’t a very ‘friendly’ name. I wasn’t trying to blow up or turn it into a job. I just did it for fun. I had no idea it would lead to where I am now.

Does the current Covid-19 fiasco have any impact on your content/community? Be it positive or negative.

I’ve definitely noticed more views and subs than usual during this pandemic. It could be because more people are staying at home or it could also just be a coincidence. But I can confidently say that COVID-19 hasn’t caused any problems.

Besides your booming Youtube channels and Twitch streams you also run the Bloo Lagoon servers (EU and US). What made you launch these servers?

I love Rust, but I felt like some things needed changing. At the time, Rust was in a weird place. Turrets were overpowered, grinding was more of a pain, etc. I created my servers with my vision of a better, vanilla-feeling Rust. Less auto turrets per base, slightly higher gathering rate, better barrel loot, and just recently – improved airdrops. This all speeds up progression a bit, allowing for more pvp.

On your other Youtube channel Blootorials you create, like the channel name suggests, tutorial videos such as Rust Solo guides and how to get scrap. Was this something you thought was lacking on Youtube?

I first made Blootorials because all the tutorials on YouTube (which honestly wasn’t a lot) didn’t explain some of the fundamental things in detail – such as how a Tool cupboard works, hardside/backward walls, where you should build, etc. My tutorials focus on the things other tutorial channels miss or fail to go into detail with. I also try to make them as short and sweet as I can. I plan to start a series on the channel called Weapon Guides – which will be 1-3 minute guides fully explaining every single ranged weapon in the game, in detail. Where they’re useful in certain situations and where they aren’t.

If you haven’t heard of Blootorials and you’re a new player (even an experienced one), I highly suggest checking it out! I’m sure you’ll learn something.

More and more youtubers have been transitioning into live streaming. What would you say your Twitch/Youtube ratio is when looking at hours spent?

When it comes to views and subscribers, YouTube is definitely where most of my community is. Follower-wise, Twitch only carries about 10% of my YouTube following. For upcoming content creators, I suggest getting a following on YouTube first and then move to Twitch.

You must have spent A LOT of hours on ‘A Solo’s Journey’, very impressive! Is this something you do full time?

Yes I did. A Solo’s Journey took me 3 and a half weeks to record, edit, and upload to YouTube. I estimated 30-40 hours of editing. I’m most proud of it, and it’s my favorite video I’ve made. And yes, I’d consider YouTube my full-time job.

A question you’ve gotten a lot I take it, what’s the process like of creating your videos?

I used to have a much more organized schedule. Thursday is wipeday, so I record from that day, all the way throughout the weekend. On Monday, I get started on editing, then finish up Tuesday and Wednesday. End of Wednesday, I render and go through the uploading process. Then Thursday morning/afternoon is when I make it public. Rinse and repeat. I’m always trying to improve the quality of my videos, so nowadays I put a lot more love and care into them. That’s why they take an extra couple of days, even an extra week.

Back to the game itself, what do you think of the current state of the game seeing it has come a long way.

Rust has definitely come a long way. I wasn’t around back since Legacy, but I was here for the early Experimental days. I’ve gone through every progression system, and my favorite was the Component-Only system. I think that if they merged that with the workbenches we have now, it would have made for some balanced progression without too much grinding. However, the current system isn’t too bad at all. It has its downsides, but Facepunch keeps adding Q.O.L changes like reduced research costs and such which improve the game’s grind. Minicopters and the soon-to-come vehicles are game-changing as well. I almost feel like Rust is going through its own little Industrial Revolution, haha. But I’m sure Facepunch will continue to improve their game for the better. I will be here to support it!

Although you do a solid deep dive into getting started, do you have any tips for new players?

I still stand by what I say in this video but in a nutshell, as a new player, I suggest starting on Solo/Duo/Trio or low population servers. That way you can learn the basics of the game without getting shit on by tryhard players 🙂

What are some of the big mistakes you keep seeing in-game? For instance base vulnerability.

A couple of mistakes around the base building I see are backward walls and people making keys for their doors. There’s a soft side and hard side to every wall in the game. If you want to know what they look like, check this out on Blootorials. Softside walls are weak and can be broken by tools. Hardside requires explosives. Make sure walls leading to your loot room and such are placed appropriately, they should be facing away from the core of your base. Some players do not know this, but you don’t need to make keys for your key-locked doors. Just hold E and click lock. I also explain this in my Key Locks and Wall Placements video, and I believe I mention it in my solo guide as well.

What’s a big NO in your opinion when it comes to playstyle?

There’s a lot of ways to play Rust and I’m not going to bash on somebody for playing their own way. For example, as much as I personally dislike playing in zergs, I don’t hate zergs themselves. Besides, sometimes they’re good for content! HEHE. I guess what is widely seen as a scummy playstyle though is roof-camping. It’s fine in base defense scenarios and such but just roof-camping to roof-camp is a pain in the ass.

What are some of your favorite adventures/encounters when looking back at these last 1000’s of hours played?

I’ve found out that my best adventures come from my solo runs. “My Craziest Start Ever,” my most viewed video, was a blast to play and edit. “A Solo’s Dream,” “SOLO ONLINE RAIDING a CLAN BASE,” and “A Solo’s Journey” were just so fun and exhilarating. It’s times like those that make Rust such a unique and enjoyable game. You just won’t get these types of adventures anywhere else.

What are you currently working on, and what are your plans for the future?

Right now I’m working on some brand adjustments – a mascot I can use in channel art, emotes, merch, and more. My logo will always be around, but I think I needed something more inviting. And my future plans are to continue making great videos, collaborate with other YouTubers, and just enjoy this amazing job I have. All my thanks to my community, it’s really amazing what we have built together.

We always like to end our interviews with some tips for our readers. Are there any last minute tips and pointers you want to give to (starting) content creators out there?

Watch other successful content creators, find out who inspires you. Check out their channel page and look for patterns. Thumbnails, titles, tags, personality. Figure out what makes them special and why people enjoy their videos. I didn’t take any classes to become a YouTuber, I’m a self-taught editor, and back when I made all my thumbnails I was a self-taught designer (if you want to call me that XD). I learned all my skills from the people I watched on YouTube.

When I first started YouTube, I was just doing what I thought was a fun use of my time, I wasn’t thinking about making money from it. But as time went on, and as I put more effort into my videos, a community started to form. If you stay consistent and you genuinely love what you make, others will too. Stay humble, listen to your followers – but more importantly listen to yourself. Ultimately you’re the one behind the wheel and if your community really enjoys what you do they will follow you anywhere.