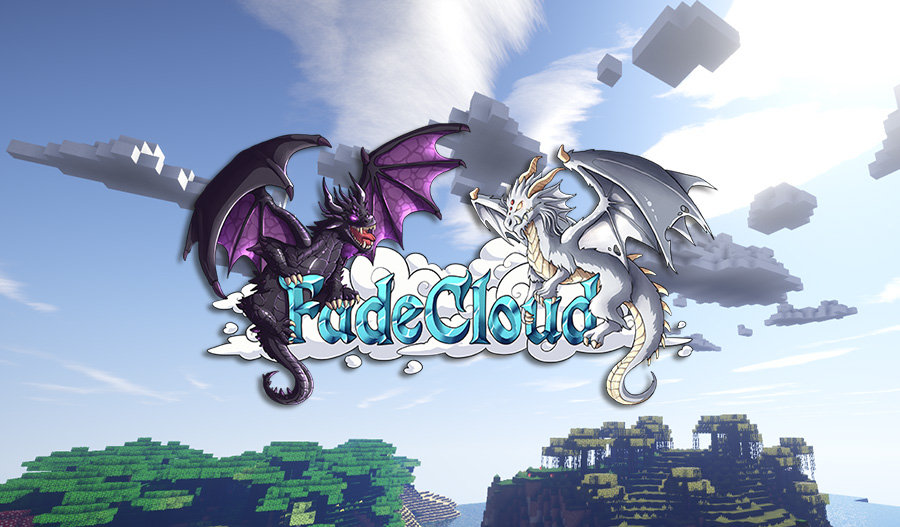 Just when I thought I was out they pulled me back in! We once again dig our way down into the world of Minecraft. Recently, I had a chat with Chrisbeg, community manager over at FadeCloud. This popular multi-gamemode Minecraft community has been going strong for over 5 years now and shows no signs of stopping anytime soon. Since they recently did a reset on their SkyBlock1 server, I thought it was time to knock on the door and see what they have been up too.

Greetings Chrisbeg! First of all, how’s it going?

Hello Syff, I’m busy but feeling amazing! Honoured to be asked for an interview, I hope you’re good too.

I’m doing great, thanks for asking. Can you tell us a bit about yourself and FadeCloud?

FadeCloud is a network consisting of Survival, Factions, Creative, Prison and our most popular gamemode consisting of two separate Skyblock realms referred to as Skyblock Destiny and recently introduced to the network – Skyblock Luminous. It was released to the public December 1st, 2014, founded by the current owner – DaddyMew. Regarding myself, I’m currently 19 years old, residing in the UK. I started to play Minecraft in 2015 and took interest in server management early 2017 meaning I’m still quite new to all of this, I’m grateful for all the experiences I’ve been granted in that time.

Did you have any community experience prior to FadeCloud?

Yes. I’ve worked on numerous recognisable networks ranging from 100 players to 1500 players. I’m not the best technical wise, which is why I really enjoy Staff and Community management. Meeting so many different people, ranging from players and staff has been key to me. I love meeting new people and have met some of my closest friends through many of my experiences.

I noticed that you were a player before you got the rank of community manager, quite a big leap! How did this happen?

Quite a long story but I was never officially a ‘player’ of FadeCloud before I joined the server as Management, although I had been on the server prior and also was signed up to the servers forums (https://fadecloudmc.com/forums) years before I took the job. Around 2016, I was part of another community and became friends with some of FadeCloud’s staff due to them playing this community as well as Fade which explains why I joined FadeCloud long before I took the job on. I joined FadeCloud management August 18th, 2018 after viewing an advertisement from DaddyMew for the Community Management spot.

FadeCloud houses many game modes. Can you tell us a bit about what (new) players can expect when they join for the first time?

New players can expect a well established network, staff team and community that has been around for years. Players can also expect new content with our resets. Unlike other servers, we aim to reset gamemodes quite frequently once we’ve realised that a vast amount of players are almost ‘completing’ the gamemode per-say, meaning that content and gamemodes will hopefully always feel fresh.

You guys have been around for a couple of years now (Anno 2016). How has the community evolved since its launch?

Not that many people know, but FadeCloud has never advertised the server in forms of YouTube or server listing advertisement meaning that growth is usually consistent and natural but may been seen as slow compared to other servers. However, FadeCloud has reached incredible numbers without advertisement such as 1500 players. Although player count has for sure depreciated since then we’re still doing pretty well number wise, as well as slowly growing due to our recent updates!

Speaking of being around for years, the same goes for the game itself. Any signs of Minecraft slowing down?

There’s so many statistics out there people have released to show that Minecraft is still doing pretty well. But It’s impossible to ignore that multiplayer Minecraft just isn’t getting the recognition it once did, most servers have dropped player count by over 50% since 2016/17. ‘Minecraft’ is quite general since we now have pocket edition, console, bedrock and obviously Java edition so my answer in regards to Java edition, for sure.

On one of the server listing websites (where you can vote on the server), I noticed the phrase “#1 Christian Server” in FadeCloud’s banner. Anything you can tell us about that?

I wasn’t around when this ‘meme’ started. But from my knowledge this started by one of the players and was taken on by the Owner. Unfortunately, FadeCloud most likely isn’t the #1 Christian Minecraft server – #exposed

FadeCloud has an impressive amount of players on a daily basis. I imagine the moderation staff team has its hands full at times! Anything you can tell us about the staff team of FadeCloud?

Indeed. The staff team are great and are like a big family! It consists of Helpers, Moderators, Senior Moderators and finally Administrators. These are the faces of FadeCloud and help to keep the server enjoyable by protecting players and removing rule breakers. No staff team is perfect, we have to remember that we’re all human and not trained robots (something some players unfortunately seem to forget), but they’re pretty darn good if I do say so myself 😉 ).

Helpers can be seen as a trial rank and have the ability to punish up to 30 days. Once these Helpers pass the initial trial stage they’re usually promoted to Moderator where they have the ability to do much more, as well as holding the responsibility of official FadeCloud Moderator. The experienced and excelling Moderators are then promoted to Senior Moderator if we see fit. Senior Moderators are mini Administrators and have a vast amount of permissions to help players in game when Administrators are unavailable. Finally, Administrators are the top staff members, meaning that they’ve most likely been part of the staff team for a while and have shown their loyalty to FadeCloud. These are the most experienced and knowledgeable of the bunch and help Management with a lot of tough decisions.

On our forums we have a staff history log that dates back to August 15th, 2018 and shows old and new players our staff history including promotions, demotions, resignations and acceptances.

In order to keep things fun & fresh, I bet FadeCloud has its own ways. Anything you can tell us about that?

As already stated, we like to make sure players don’t become bored of our gamemodes or content and thus like to reset them often thanks to our Development team. We always try to host a number of events, some past events include Spleef, PvP, Creative Build Events and so on. Our events are announced under our forums announcements, we will be working on another soon!

Indeed! We love to promote content creators by providing them with items to help make their stream/video interesting. We do currently have media ranks you can apply for on the forums. Although we don’t have a specific rank for these players, content creators who do catch our attention are usually contacted for specific perks!

Does Fadecloud have its own developer(s)? Or do you guys use 3rd party add-ons and/or developers?

FadeCloud does in fact have it’s own team of developers, some which have been with FadeCloud for a while! You can check our Development team out on the forums, we did recently bring another to the team who had previous development experience on FadeCloud back in 2016 and are excited for the new content he brings to Fade.

Speaking of development, anything (new) you guys are working on currently?

Of course, there always is something new we’re working on. There’s also something super special that I unfortunately cannot speak about.

I bet you must have some good memories/stories. Anything worth sharing with us looking back at your time with FadeCloud?

Yes of course. I’ve met some amazing people in the 9 ish months I’ve worked at FadeCloud and I’m super grateful to have done. I always love our staff discord sessions, a lot of roasting and trash talking, but that’s what makes us a big family!

As always, do you have any tips you want to give to other (starting) communities out there?

It’s an expensive game, especially starting off. All I can really suggest is to expect the unexpected, some communities grow super quick and others not so much. If you’re dedicated and have great community engagement you should get some super loyal players in no time.