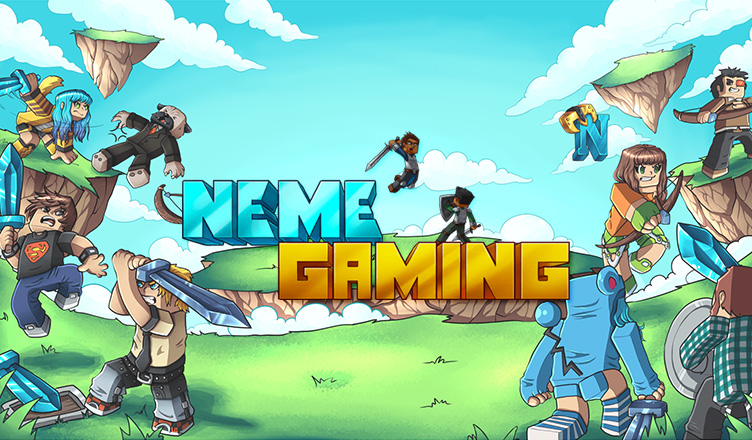 With our torch and pickaxe we dig our way down into the world of Minecraft once again! We had a little chat with Gaurav who is the owner of Neme Gaming. This community started out as a factions server under the name “EpicCraft” back in late 2011 and rebranded as Neme Gaming when they became a network in mid 2013. With a big and active community and years of experience, I was eager to hear his story.

Hey Gaurav, thanks for the time to do this interview with us, how are you doing today?

What can you tell me about yourself and Neme Gaming?

Myself — I’m Gaurav, I’m a first-year uni student studying Computer Science and Economics.  I first got into Minecraft when my friend bought me an account for my 12th birthday, and later started what was then called EpicCraft (cringey, I’m aware) for my friends and I, and it grew into what NemeGaming is today.  I also recently bought PartyZone (mcpz.net), and am working on growing both networks separately.

How did Neme Gaming grow into such a big community?

NemeGaming has come a long way from its start, and now has all the “main” gamemodes if you will — Skyblock, Factions, Prison, Survival… the list goes on.  Before we became a network, we were one of the top Factions servers (in the Summer of 2013), and that got us the attention we needed to launch ourselves into a network.  We have also gotten a lot of advertisements from voting sites and Youtubers that have helped us grow.

Neme Gaming currently has 9 servers running different game modes. Which of these game modes are most popular within your community?

Skyblock is definitely our most popular gamemode, because we’ve invested a lot of time and resources into making the experience there unique and more enjoyable for players.  We do that for all of our servers, but Skyblock is just more popular, probably because it’s a very popular gamemode in the Minecraft community as a whole currently. Skyblock is also an easier gamemode for us to get Youtubers to do a series on; for Factions, their base will get raided, for Prison, they spend most of their time mining, which people don’t want to watch on a video, and for Survival, they can get griefed pretty easily.

With 9 servers and an active forums + Discord it must be a lot of work enforcing the rules and maintaining a nice atmosphere at times. How is the staff hierarchy set-up and what are the tasks for each rank?

We have 6 staff ranks (not including Owner of course)  — Helper, Half-Mod, Mod, Senior-Mod, Admin, and Manager.  Helper and Half-Mod are server-specific, whereas Mod and above are global.  Each rank has its own duties and requirements, but we all have the common goal of improving the server and ensuring that every player has the best experience possible.

Helper — The main job of helpers is to help players (as you might imagine by the name) by answering their questions and giving them basic advice on how to succeed on the server and things like that (how to set up mob farms or ore generators on Skyblock, etc.).

Half-Mod — (what most servers call “Junior Mod”), this is the first staff rank that can punish, and that’s a big part of what they do — enforcing our rules in game, on Discord, and on the forums.  Half-Mods also get the privilege of being able to join our staff groups, almost like clubs for staff. Each one has a fun acronym — ROB is the team that handles player reports, SAM handles Staff Applications, BART handles ban appeals, and there’s a couple more I can’t remember off the top of my head.

Mod — This rank is essentially the same as Half-Mod, except it’s global.  When I word it like that, it doesn’t seem like a big difference, but the difference between 1 server on our network and all of the other 8 is massive.

Senior-Mod — We use this rank as a sort of “trial Admin” rank — Senior Mods are like Mods but with the power to do more, such as being able to spy on someone’s PMs and commands if they’re suspicious, teleport to players and coordinates (while vanished) to investigate claims of x-raying and other such things, and get access to CoreProtect to investigate claims of griefing on our Survival server.

Admin — Admins get pretty much all permissions in-game (except for things like /stop), because if they’ve gotten this far, we very much trust that they won’t abuse or anything like that.  Admins also start to take more leadership responsibilities, as they can lead the teams that I mentioned earlier, and some have even formed their own.

Manager — We have different management positions at NemeGaming, and each one is unique and can’t be explained as briefly as I’d like to, but I’ll do my best.  Our Staff Manager runs the SAM team and mentor team, and makes sure that we are bringing in new staff that meet our qualifications (and that we have enough staff).  Our Community Managers are basically advocates for the community — they listen to suggestions and bug reports from in game, on discord, and on the website, and follow up on them with the appropriate team/person who can implement or fix it.  Our Network Manager basically runs the day-to-day operations. We also have another management role that doesn’t really have a name or words to describe it other than “everything else that needs to get done”.

What is your system of picking new staff members and what are the requirements to be a candidate?

We have a staff application on our website where you can apply to be a Half-Mod, and the main requirements are dedication, maturity, and helpful.  If someone doesn’t quite meet the requirements to be a Half-Mod but we’d still like them on our team, we give them the Helper rank and give them feedback, and work with them to get them more involved, which usually leads to them being promoted to Half-Mod.

The Staff Application for Half-Mod is the only staff application that we have, all other promotions are done internally and must be earned.

I noticed on your website that you have an events page. what kind of events are we talking about?

This was created mainly for UHC matches for back when we had those, but we still use it for drop parties, and we hope to expand it more soon.

Any special (holiday) events coming up?

Yes, we have a whole Holiday event thing (for lack of a better word) planned, which is set to be released in early-mid December.  I don’t want to talk too much about it, though, since it’s still in the works ;P

Minecraft is highly customisable and can be crafted (pun intended) to a communities liking. Do you have your own developers, or do you hire third party developers?

That’s not to say that our own developers don’t make new projects — one of our own devs (Lewys <3) made SARAH — our own really cool anticheat that uses Machine Learning to accurately detect hackers.

Do you have any tips for starting developers/people who want to learn programming?

I do — it’s never too late or too early to start!  There are tons of cool websites out there to learn coding (https://www.codecademy.com/).  No matter what field of work you plan on going into, learning code is becoming exponentially more important as time goes on.  It also makes you better at problem solving, which is great for literally any profession.

*whispers: Anything special you guys are working on?

Yes, some cool projects are coming up!  A lot of these projects are internal and are things that anyone besides our developers and managers will never see, but they do great work.  We also have an experimental system that we plan on implementing soon that — wait, I can’t talk about that, sorry.

Looking back, what are some of your fondest memories?

I’d say the best moment out of this entire experience with Minecraft was getting the first player to join (that wasn’t me or one of my friends).  I remember literally just flying around the player and stalking them to see what they were doing for an hour because it was so cool to think that someone else wanted to enjoy what I had created.

There is always one struggle that a lot of starting (minecraft) servers/communities have and that is advertising/getting new players : How did you attract new players when starting out? (for the non Minecraft players, there is no in-game server browser)

I’d say the best way would be to post the server on voting sites to get yourself out there, and if you can afford it, buy a sponsored slot on one of them.  You can also get a Youtuber to make a video on your server, which will bring in their audience and get the word around.

The best way to spread a message about anything is word of mouth — if you give players a great experience, they’ll undoubtedly invite their friends to come and play with them.

Do you have any tips for (starting) communities besides on how to attract new players in the beginning?

The most important thing you can do is to set your server apart from the rest — if your server is a carbon-copy of another server, why would players join yours over anyone else’s?

How do players join your server(s)?

Players can join through the IP play.nemegaming.com on any version 1.7-1.12.