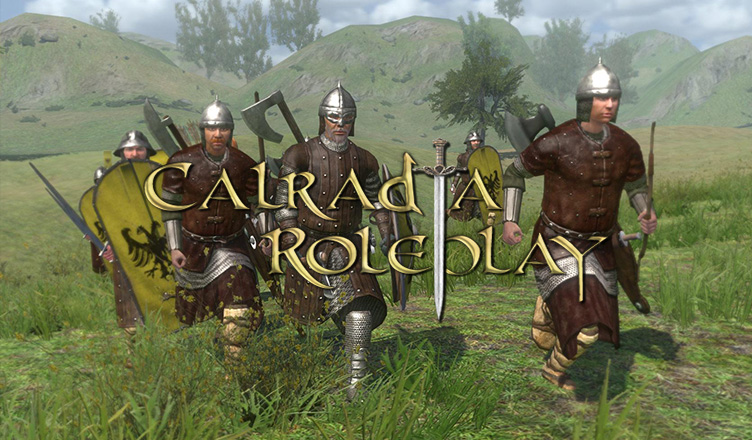 On the note of Link’s “Types of roleplay communities” we continue down the roleplay path and have a little chat with Kingsman. He is the community owner of Calradia Role Play, a serious roleplay server running within the world of Mount & Blade : Warband. Kingsman started the project in 2014, via trial and error he found the right formula and has been sticking with that formula for a year and 4 months now. What makes Calradia Role Play unique is its roleplay which he will explain.

Thanks for doing this interview with us. How are you doing?

I am great thanks for asking, never thought I’d get interviewed for CRP

Can you give us a brief rundown of how and when you started Calradia Role Play?

I first started Calradia Roleplay back in 2014, it took me a long time to do it when I started as I had no one helping me. But, I just kept releasing my servers and tweaking it each time until it worked, I would create the maps and websites each time myself some of them were pretty embarrassing.

How and when did you know you had the right formula when it comes to your game server?

It took me a long time to get the right formula and a lot of it was trial and error, making sure to get a good base and building from that is important for me personally. I wanted to know we had a strong core, if you don’t begin strong, you’ll have far more trouble in the future. So that’s just what I did, I tried again and again until I finally found a good foundation for it to grow.

How is the staff hierarchy set up, and what are the tasks for each rank?

Myself and my Head Administrator MarkZ run things on the grand scale, and below us are a group of Senior Admins who run things in our absence. Below that are Administrators, who have much more authority and different privileges in and out of game (though less than those above them), and then there are Enforcers, who have less authority and in game ability. The enforcers help to police the server and keep people in check, and the responsibility grows each rank higher one gets.

What is the process of recruiting more staff members for the server?

We allow players to make applications for the staff, and we as a team analyze, critique, and determine as a collective whether or not we believe the person to be fitting for the staff. After discussion, it is put to a vote and each staff member gets one vote.

When it comes to roleplay, how is the roleplay on Calradia different than on other servers?

The Roleplay on CRP is, simply put, unique. It has a certain gravity to it that I have never been able to find on any other game, not WoW Roleplay, not Star Wars, not even D&D (Though D&D is close, but much smaller scale). Your character is your imagination personified; you could play the lowliest of peasants, humbly begging for coin in the streets and then spending it all to drink away your life at the inn, you could play the most sinister of villains, plotting and scheming your way into power, or you could play the bravest of warriors fighting for honour, gold, coin, or fame. There are endless possibilities to pursue, and all of them have the alluring risk of mortality. IN short, you can die, in fact I would go further and say, you -will- die at some point in your roleplaying career. But these characters become so well developed, from the armour they don, to the weapons they carry, from the friends they cherish, to the enemies they vilify. It’s all here, and it’s all just waiting to be discovered.

Do you host special events? if so can you give an example?

We often host special admin sponsored events that further the grand storyline of Calradia, the realm in which the roleplay takes place. These can range from simple fairs, to full scale invasions of the territory, the video below is only one of the many events we have hosted, and these events all have lasting impacts on both the lore, and the server itself.

As a small tip for newcomers, how does one start playing on a roleplay server such as yours?

There can be a bit of a learning curve if you don’t begin correctly. The best option would be to simply join the game, and be friendly. Try your best to read over the ruleset first, but in general just be kind and you will find yourself some help. The community is very willing to teach new comers, but those new comers must also be willing to learn. I would suggest to anyone wanting to try, spawn in and go to a main settlement, seek out the Lord or Lady of the region, and try to get yourself a job. Also, you should always take a quick moment to comment in OOC (Out Of Character) chat “// Hey there, im new here just so you know.” This small step will let the player know that any mistakes you make are not made out of malicious intent, but rather ignorance of the current ruleset.

With a custom gamemode comes custom scripts, do you do all the programming, or do you have a developer for those tasks?

I pay a developer to do most of our coding and scripts for us, as I myself am not a coder.

What are some of your fondest memories of events that occurred within the community?

We have so many things that have happened since our conception that it would be impossible to pick. I always love to hear about how CRP has helped people  in their real lives however. I know people who have began relationships through CRP, people who have dealt with hard times, and even people who have gotten jobs through it! As for on server memories, one of my favourite would have to be the Vaegir invasion in the first rendition of our server, in the Riverdale scenario. Now, it was brutal to administrate, and my Knight James Alard was… well flayed alive during it when captured, but! It was a wonderful experience all around because for the first time in any roleplay server I have ever played, it felt real, it felt like a real war, rather than one big glorious battle where no one dies. People lost loved ones, cherished friends, soldiers and families. Some of the saddest scenes in roleplay are often some of the most incredible to partake in, because you become truly immersed in the world that we have created, and I just love knowing that.

Since Mount & Blade is 7 old, how is the M&B community doing nowadays?

Let’s talk about Bannerlord, the next installment in the Mount & Blade franchise. Do you have any plans with your community?

We have big plans for bannerlord, we are absolutely going to be releasing a server there and I plan for it to be bigger and better than anything we have done before. We’ve already began fleshing out lore and idea’s for a new scenario in bannerlord ad the more information they release the more we work on it. Even if those reading don’t decide to play CRP here in Warband, I highly suggest those that enjoy serious roleplay to join us in Bannerlord.

Besides running your community and playing on the server, do you play any other games?

Over the years you must have had some periods when your motivation was lower than usual, how did you manage that?

Oh definitely my motivation wavers, however I am a rather stubborn person and I refuse to allow CRP to fail, especially when people say it’s doing badly or dying. I often get annoyed by such comments and so I roll up my sleeves and fix it. Even when i myself am not all that involved I have a solid foundation of staff there to keep things in check and running smoothly without me.

Finally, are there any tips you want to give to other (new) communities?

Just keep your resolve and there’s no way you can fail, try, try, and try again. If you are stalwart and vigilant, you will succeed.