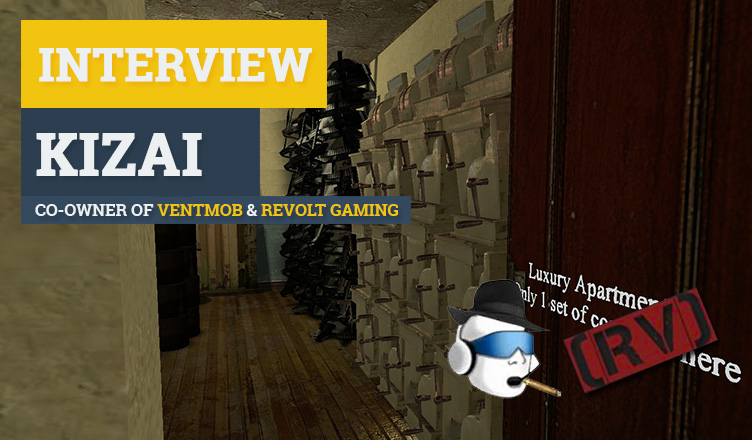 In this interview we will be chatting with KiZai (Adam) who is currently in his mid 20’s. He was one of the co-founders (Super-Admin was the term they used) of both the successful Ventmob (VM) and Revolt Gaming (RV) communities within the game Garry’s Mod. Currently working as a freelance software developer he retired from running gaming communities.

Ventmob was founded in September 2008 by Drewley, KiZai, Clown and Chaz. After being a classic DarkRP clan on different server they launched their own Roleplay server on the 27th of November the same year. Shortly after Wyvern (super-admin) and Lexi (developer) joined the staff team. What started as a fun little project resulted in being the most popular server in Gmod for a good while. Ventmob dissolved in late 2011 and so Revolt Gaming was born.

Following Ventmob KiZai, Clown, Joker, MattManAway and Snake Logan founded Revolt Gaming, a spiritual successor to their previous community. Revolt Gaming hosted a similar roleplay server and had an active Experiment (this gamemode is called Phase Four nowadays) server. RV had a lot outside of GMOD too – servers would come and go as the games were in fashion. Unfortunately Revolt ended around a year after it’s birth.

First of all, thanks for being the first one to be interviewed by us. Your soul is now ours! How are you doing?

Pretty good! Thanks for reaching out to me. I have not thought about VM and RV for a long time.

Let’s start at the beginning being Ventmob, how/where did you guys meet each other?

I had known Drewley for longer than I can remember, and met Clown in high school. Clown and Chaz had played together online for a while and I met him after Tom (Clown) had known him for a long time. All of us had been playing games for years together before we started Vent Mob.

When did you decide to start your own community, and why?

We had always been a community of sorts now I think about it (there were a lot of us who came and went while playing different games). We did not make the decision to formally do it until we wanted to identify ourselves as a ‘team’ on GMod.

As for why we started our own server – we often disagreed with how the servers we played on ourselves were administrated, and felt we would be able to do a better job ourselves. I can’t say if we were successful or not but we sure had some fun.

What’s the story with the name Ventmob?

We actually got our name from a ban request on a really old Dark RP server (I can’t remember who it was for). In that request they referred to us as the ‘Vent Mob’ because we used Ventrilo to communicate and it just stuck.

Did each staff member have a specific task? if so what was yours

I don’t think any of us did really – Drewley was the tech man back in the day but we were all equal in the rest of our tasks as far as I was concerned. We picked up things that needed to be done as and when they arose.

It was more about having fun with each other and the community than assigning tasks because then it would have been more of a job. We just wanted to have a laugh. First and foremost we were a group of friends having fun.

Ventmob roleplay was a huge success, did you guys see this coming?

Not at all. I thought it was a glitch the first time I saw our little server sat at 64/64.

Did the success affect you as a member of the Ventmob staff?

More time had to be dedicated to administering the server, but we never stopped having fun. We appointed a strong admin team to take the load off ourselves (which grew as the server did) and non GMod related gaming together helped us not lose our minds.

Since it was such a popular server I can imagine a lot of player wanting to be part of the staff team. What was the process of recruiting more staff members for the server (server moderators & admins)?

We ran with the slogan “Don’t ask us to be an admin. We will come to you if we believe it is right”

How did you and the team manage such a big community, are there any tips you can give?

We had the large (and very trusted) admin team to support us. That’s the best tip I can give – have a trusted admin team backing a community who don’t take themselves too seriously.

Were there downsides to the success?

If I had to pick a negative, it would be the ban requests. I felt they were coming in faster than we could resolve them for a time, and you can never please everyone however it was resolved.

Life just carried the super admins in different directions, much like how RV ended. Tom, Joker, Matt, Wyvern and I still had more time to spare when VM dissolved so RV started.

What are some of your fondest memories of events that occurred within Ventmob/Revolt?

I couldn’t even begin to list them there were so many. VM started as a group of friends having fun – it wouldn’t be fair to pick one or two moments out of the hundreds we had (both in and out of gmod)

Did you see the gaming community landscape change over the years?

The more sophisticated game modes became readily available towards the end of my time with GMod, which saw a lot more communities pop up. There was also a worrying trend towards cyber attacks (more threats of a DOS or DDOS than I can even remember) that seemed to increase as time passed.

Do you still keep in touch with your fellow ex-staff members?

Whenever I can, absolutely!

“a community lives or dies by the admin team”

Do you play any games now?

Of course! Whilst I don’t have anywhere near as much free time as I used to, I still find time to play games. I am currently enjoying Overwatch as well as the newly released Nioh.

Over the years you must have had some periods when your motivation was lower than usual, how did you manage that?

You can never run out of motivation for playing with friends. When we grew tired of GMod we would take a break to play other games, and come back to GMod when we were ready.

Finally, are there any tips you want to give to other (new) communities?

I’m out of touch with the state of things now, however I still believe a community lives or dies by the admin team. Quite simply we just had fun, and built a community around that