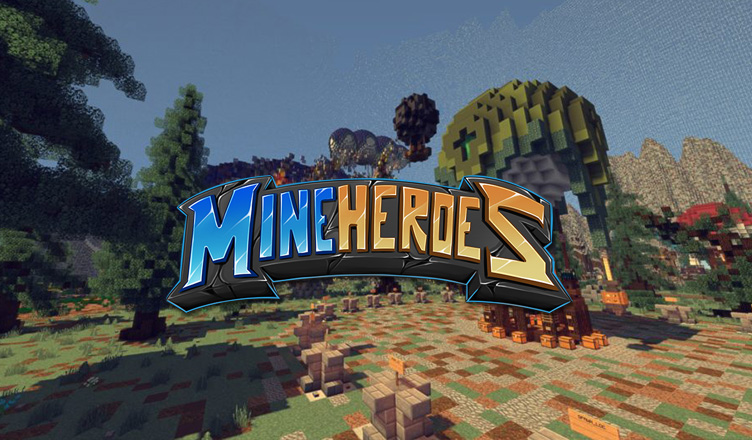 Blocks and giveaways seems like a match made in heaven! We had a little chat _Kron who is one of admins over at Mineheroes. With a top ranking on various server listing directories and player numbers hitting well over a 1000 a day, this is one of the heavy hitters in the Minecraft scene. _Kron who has been part of the Mineheroes community for over 3 years talks about his time within Mineheroes and how the community got this big. Let’s DIG our way down, shall we?

This giveaway has ended, here are the winners:

Hey _Kron(?), thanks for doing this interview with us, how are you doing today?

What can you tell me about yourself and MineHeroes?

Where to begin… My in-game name is _Kron, one of the few admins at MineHeroes. I’ve been a part of this community for over 3 years now and have watched it rise and fall, and rise again to where it is now. My role covers over staff management and community management. I’ve been a staff member a few times in the past however, I’ve recently come back again in August. Since I’ve come back our player base has reached all-time highs, and I’m very proud to be a part of that.
MineHeroes itself has been around for 5 years now, and has the community to show for it.

How did Mineheroes grow into such a big community?

Quality content and word of mouth would probably be our largest factors into growing as a server. We release new content regularly, features that the players enjoy and suggest to us on the forums. And with that, people start spreading word to their friends about our server. Due to this, we have managed to grow at a steady pace and maintain the player base we have currently. Our goal at the moment is to continue improving our current game modes to further encourage players to play on our network.
I would also say having quality staff members has attributed towards the servers growth, as well as the continuous rounds of applications we host. Not only does it help out the players, but it also encourages positive reinforcement. Since our target audience is targeted towards the younger generation, having a positive atmosphere allows us to have a friendly community. Which in the end will help out other players regardless if they have the ‘staff’ tag or not.

You guys are running 8 game modes at the moment being: Factions, Survival, Prison, OPPvp, Skyblock, Creative, OPfactions and Pvp. Which of these game modes are most popular within your community?

I would say Factions and Skyblock are our largest game modes.
I’m going to be real here and say it’s likely because it’s trending at the moment. YouTubers around the world have focused their directions towards Skyblock, Factions and Minigame servers. If you are playing a large server, expect one of these three to be the largest game modes on the network.
With this, we’ve been putting more development towards these two servers. Custom enchants, modified factions, simplistic designs and balanced economies allows players enjoying their time on those servers.

I must say that I like the artwork you guys use on your Twitter. Who made them, and are they custom made?

Haha, yeah. The art is custom made. I wouldn’t say I know the artist though, the owner of the network has these connections.

We have a few set requirements for YouTubers and twitch streamers.

There is a process that is found on our forums to apply for the position.

With a big player base comes more work for (in-game) staff members. How is the staff hierarchy set-up and what are the tasks for each rank?

We’ve got 4 set ranks that are obtainable if you meet the requirements, all with separate but similar roles.

Helpers
This is our trial rank, and the only rank non-staff members can apply for. This rank applies to one server, and there are expectations set for the helper to fill in.
We don’t focus entirely on the staff member maintaining a good relationship with the community, we also focus on the staff member having a good relationship with the staff team to reduce future conflicts.
The helper role is rather simple, help out the players and maintain a positive atmosphere.

Moderators
The moderator rank applies globally across the network, allowing the staff member to maintain a positive atmosphere all around. It’s a more advanced version of Helper, and should be the rank most of the staff members are comfortable with.
The moderator rank does have more permissions to help allow keep the peace between the servers.
They also have an increased forum role. They are expected to assist with support forums and interaction with the community.

Senior Moderators (Sr.Mods)
The Sr.Mods have a closer relation towards Admins, their roles are more centered towards guiding the Moderators in times of trouble or need. They can also assist the admins when it comes to handling staff applications. If you are in this position, you are expected to have a good relationship with most of the staff members as well as consistent social interaction with the team.

Admins
Even though it’s a rank not many staff members get to, it’s not impossible to achieve the position.
However, the Admin requirements and the role is far above the previous ranks. Admin duties consist of handling server resets, server management, purchase related issues, team management and a whole list of other topics that I could go into.
Because of the gap between the two ranks, achieving the admin rank requires a lot of trust with the network owner aswell the rest of the team.

None of the positions above Helper are applied for, they can only be earned through hard work and dedication

What is your system of picking new staff members and what are the requirements to be a candidate?

The two simple requirements are to be active and to maintain a positive atmosphere within the community. However, even those are hard to maintain, as we expect the applicant to be active on the forums as well as maintaining activity in-game. Maintaining a positive atmosphere is also rather hard. We expect that the application is understood when they are assisting players so there isn’t any confusion. There are some ‘forced’ requirements to prevent clutter when we do open applications.
The current forced requirements are:

If neither of those requirements are met, the applicant would not be able to create an application.

Once all the requirements are met, a thorough search of the players information and logs are taken place to see if they are an eligible applicant; then we’ll take the player into an interview to test their common sense abilities.

Do you guys host (special) community/in-game events? if so, what kind of events are we talking about?

Our most recent major event that we have hosted was in December when we hosted a bunch of events at once. One of our most common events is the Christmas Build contest where participants compete with one another to build the most detailed Christmas themed build they can imagine.
Later, we allow our Build Team to judge the winners. We haven’t had an event recently due to how busy the team is working at.
We’ve got scheduled events that also run every few hours without the staff taking guidance; events like KoTh, LMS, Mob Arena and a few more will be coming in the future.

We do have a minor event coming up soon for Easter however, I’m not allowed to give out any more information other than that 🙂

Let’s talk some development, It is well known that Minecraft is highly customizable and can be crafted (pun intended) to a communities liking. Do you have your own developers, or do you hire third party developers?

We’ve got our own development team, who have helped the servers growth immensely. They’re also really friendly people that interact with the community to hear their suggestions also.

Are you guys working on anything special?

We’re working on a few big updates at the moment, yes. I can’t say what it is or what it’s for however, players will enjoy it quite a bit. Perhaps a few of the updates will be out around the time of this being posted!

Do you have any tips for starting developers/people who want to learn programming?

I’m not much of a developer myself, having little experience with programming. One of the most important things I’ve noticed is you need a sense of logic thinking. So if you’re struggling with maths and want to become a developer, I highly recommend learning some difficult levels of maths (such as trigonometry, matrices, algebra). Especially if your interests revolve around game development.

Looking back, what are some of your fondest memories?

Getting acknowledgment from a Senior Staff member prior to being a helper a few years ago was the first thing I recall. I was heavily influenced by a hint of appreciation a few years back. A few weeks after that message, I became the first staff member for the largest game mode we have currently (skyblock).

There is always one questions that a lot of starting Minecraft servers/communities have and that is: How did you attract new players when starting out? (for the non-Minecraft players, there is no in-game server browser)

I cannot really answer this question with experience however, I can give some tips on how I can imagine any server to grow and maintain it’s player base.
Target Audience
Decide whether you’re aiming for a toxic community, a family-friendly community or anywhere in between. This is probably one of the first steps into building your community. So having a set of rules set up to prepare for situations where issues arise is important.

Content
If you’re aiming for a family-friendly server, do not aim for Factions or any hostile server straight away, aim for the current trends and use it to your advantage.
The current trends are Skyblock and Factions, both plugins are accessible for free.

Having good quality content will encourage your players to spread the word about your server, growing the server.

Do you have any tips for (starting) communities besides on how to attract new players in the beginning?

If you’re at a steady 20 player base, it’s probably worth looking into having a forum if you haven’t got one already. This is where lots of the players will communicate and form a forum community.
Also, it’s very important on who you chose as staff. Do not hire staff members that ban for ‘gtfo’.
Also, if you are one of the types of Server Owners that ban for ‘gtfo’, your server will die out eventually. Your server will get a bad reputation and the players will just turn toxic.

Plan updates weeks ahead, do not release all your content at once.
Players like updates, if you’re releasing all the features at once and have nothing to update afterward, then the players will just start complaining.

How do players join your server(s)?

You can connect to our network through Minecraft at mineheroes.net, we allow clients from 1.7->1.11
Our forums also shares the same address.