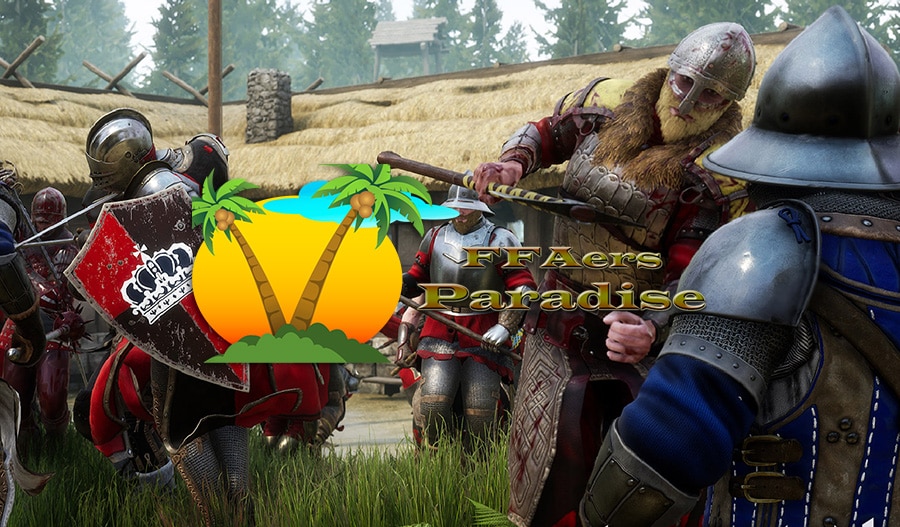 I love me some good old melee combat games such as Mount & Blade, War of the Roses, Chivalry and lately, Mordhau! Like all of the mentioned games, Mordhau is no stranger to having duel server run by their communities. During my playsessiosn I bumped into one of those communities being FFAers Paradise. I managed to snatch the two owners Sjimmie & Whale Tits for a quick chat. Let the fight begin!

Greetings Sjimmie, cheers for doing this interview with us. First of, how are things going?

Excellent, thanks for asking

Grats with the duel server you guys got going on, my go-to server for Mordhau. What can you tell us about yourself and FFArs Paradise?

We used to start with playing War of the roses, That’s how we started playing medieval games. But unfortunately War of the roses got shut down recently. After 2 years of not playing any medieval games mordhau came. We were very excited to buy mordhau, When we purchased it our attention was immediately drawn to duel servers. So after a while we decided to start our own duel server. But our duel server was not like the other duel servers. We got a lot of help from our clan members with starting up our server so in the first week the server was already crowded 24/7.

We are very thankful to our community and that’s the reason we are one of the best duel servers to this day.

Did you and your community have any others servers prior to the Mordhau server?

Back in the day we used to have a Garry’s mod server for darkrp.

As far as mordhau we have been administrators on other duel servers but this is our first official server that we own ourselves.

Duel servers have been around for a good while now be it Mordhau, Mount & Blade, Chivalry or War of the Roses for example. For the ones who are new, what exactly is a duel server?

The main gamemode of mordhau is frontline. That’s a 32v32. In duel servers you are playing unofficial 1v1’s

Any plans on migrating to other games in the (near) future? Mount & Blade Bannerlords for instance (whenever that finally releases..)

We don’t have any plans for right now, But since we have such a great community if we find any good games in the future we will be open to starting a server on that game.

Mordhau has been losing players lately (although it doesn’t show in your playercount which is solid!). What are you views on the state of the game and what would you like to see changed/being added?

Mordhau is the first game that has been addictive for a while. We play it almost every day at the moment and It’s sad to see that players are already leaving. We think that people are leaving because there are minor issues in mordhau like being able to glitch into walls and new content that has to be added for people to stay in the game, But the developers are working really hard to keep the community happy. And It’s not easy managing a game with only 11 developers in your team.

Mordhau has a limited set of admin tools as of yet. How is order being maintained on your server?

As of now it has been manageable but the tools you get are not enough to have a professional system going on your server. The logs are not detailed enough for example, If you kick / ban someone it doesn’t show which admin has banned or kicked that player. And it would be great if you have moderator rank that can maybe only ban for a limited amount of time and is unable to add admins to the list himself.

Are players able to become members of the clan/staff? If so, how?

Yeah, If a player wants to become a clan member you have to be active on the server and nice to the rest of the community. And if you want to become staff you can join our discord server and me or sjimmie will review your application.

Anything you guys are currently working on?

As we are writing this review we are working on starting up a new duel server. Our current server is 24/7 camp while our second duel server will be 24/7 contraband. We asked the community if they wanted a skirmish server as well but right now they are satisfied with the new duel server thats coming soon.

Although you guys are fairly new, what are some of your fondest memories looking back?

Mainly our great community that has been setting up events like romans vs gnomes without needing our help at all. And seeing our staff members working really hard to keep the server clean of FFAers and helping our players if needed.

As always, do you have any tips to other (starting) communities out there?

Be original and have a great staff team that is on your side to help you.