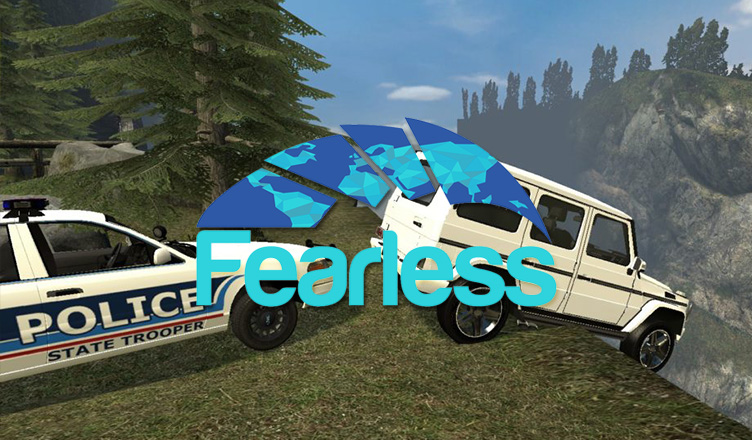 Today I talked to ‘SoulRipper’, the owner of the 9-year-old Garry’s Mod roleplay community ‘Fearless’. In 2008, they revolutionized the semi-serious roleplay genre within the GMod community, and its timelessness is evident as the community is still thriving to this day. He explains the paramount nature of selective and democratic staff teams, and the very near future for the Fearless community!

“Every active staff member has made Fearless what it is now, and they are all important.”

Ayup Soul. Thank-you for taking time out of your busy schedule to do this interview! How are you today?

No problem. Great, how are you?

I’m great, thanks. So, for those who don’t know, Fearless Roleplay is a Garry’s Mod role play community which runs on the ‘CityRP’ game mode. How would you best describe this game mode to someone who has never played it?

That’s a good question. It’s certainly not easy to explain to someone what CityRP is, especially when he/she has never heard of Garry’s Mod. People would think they are able to buy it somewhere and install it. However, as you know, it’s not as easy as it sounds. You have to first buy Garry’s Mod and then join our modification. I would describe CityRP as a virtual reality game with shooter elements and RPG. To strangers, I’d compare it with Second Life, including guns.

So, as you know, the Fearless community has been running strong since 2008. It is now 2017, which means it has almost been running for 10 years! Have you got anything planned for the 10th anniversary?

It doesn’t feel like we’ve been running this community for nearly 10 years already! I still remember when it was created by me and a couple of friends as just a fun server to play on. The community is about 9 years old now and we’ll have to make plans this year for how we are going to celebrate the community being around for a decade. It will certainly come with a big celebration and possibly a major event.

Excellent! I can vouch for that too since my joining in 2012; it feels like it was just yesterday! The game mode has also evolved over time from a DarkRP server to the CityRP game mode we are now playing on today. On top of the game mode’s evolution, do you believe that you as an owner have evolved?

The gamemode has certainly matured quite a bit. If you would compare the release of 2008 with the current gamemode, you would laugh your ass off. And I do believe that along with the development of the gamemode, I’ve also gathered more experience over the years.

I still remember the CDM death taxi very clearly! Why did you decide to set up that DarkRP community all of those years ago?

Haha. I’m not sure why you refer to DarkRP. We’ve used the DarkRP core for about 3 days until we decided to switch over to ‘Cider’. When we created Fearless, we tried to make a server that is fun for players, even for those who don’t want to roleplay on a SeriousRP level, but neither on a DarkRP level. That’s why we went for a Semi-Serious RP. This is slightly less strict than SeriousRP, (for example you are able to see and use in game names on first contact). However, we obviously allow people to roleplay on a Serious level if they’d want to. Many DarkRP servers ‘abuse’ the Semi-Serious title. They are often servers lacking an organized staff team to enforce the rules.

Firstly, we have about 250 hand-written rules made to explain what is allowed and what not. Then, we have an administrative team existing of 16 members, and we’re the first community to introduce roleplay teachers. These people assist newcomers and they teach them the basics of our game.

Speaking of the team, the communities’ long existence connotes that the staff team has been a large playing factor in its success. What is the structure of your staff team and what process do you use to add news players to it?

We use a classic team structure which is seen more often. We use simple names to make sure people from all nations know what they mean. From top to bottom we have Owner, Super Admin (managing admin team), Admin, Trial Admin and Teachers. Our development team consists of Developers and Contributors. Every active staff member has made Fearless what it is now, and they are all important. Unlike many other communities, we do not sell our admin slots. We’re selecting people who we believe would be a good addition to the team. This will then be decided by the admin team using a poll. We look at the activity of the player, their experience, their history, etc.

Sounds like a good structure to me, and has evidently worked well! Over the years, there must have surely been times when the community was struggling and not doing as well as you would’ve hoped. How did you cope with these times and find motivation to continue?

Certainly, there have been quite a few difficult times for our community. Think of DDoS attacks, conflicts inside the team, technical malfunction and tension from the player base. But we’ve gone through these times and, even though it sounds cliché, we’ve come out stronger from them and learned from mistakes. The motivation to continue is the number of players who are enjoying the game daily.

Speaking of enjoyment, when did you know you were onto a winner with the CityRP game mode?

When we were required to buy additional slots to allow more players on the server, and at a later stage by buying dedicated servers.

Fair enough! Clans are a large part of the whole city role play experience; what are you doing to keep the idea of setting up and maintaining a clan fresh and exciting?

We give the players a platform such as their own sub forum to run their clan. A couple of years ago, a clan system was created for our gamemode which also allows easier communication between clan members. Last but not least, we give clans a lot of freedom so they can roleplay anything they can think of.

What is your fondest memory from the Fearless community?

Well that is a hard question. I have many good memories built up in these 9 years. I don’t really have any particular memory that I would count as fondest, but my best memories are playing with my friends and doing roleplay together.

What would you say your number one role play tip is?

Act like your character is a real-life person. Would you run away when a 9mm pistol is pointed on your head? Roleplay realistically, and a great way to boost up the roleplay is to use the commands /me or /it. They are both text-based roleplay commands, and /me is for an action of the character while /it is the narrator.

Solid advice! Unfortunately, it seems as if the current Evocity V2D server is receiving a lot less attention than it used to. Do you have any plans to try and revive this portion of the community?

The V2D map and the V4B1 map are both similar in terms of their style. They are both cities with a downtown, forest, suburbs, etc. People will choose the better map which is V4B1. I’d think the V2D server should run another map with a different setting.

Have you got any in mind?

We are currently internally discussing a replacement map. Even though there are many maps to choose from, the maps that fit our kind of roleplay are hard to find. It will probably be a less modern environment, such as a town, which is ironic considering our gamemode is called CityRP. However, by offering something different we think our second server might receive more popularity.

Haha. That’s a wise sentiment and indeed interesting. As the CityRP game mode is obviously custom, do you do the development yourself or do you have a team that does it for you?

Both my team and myself are developing daily to create new features for the gamemode and to fix bugs.

Last but not least, is there any advice from your experience that you believe would be worth giving to new communities?

Ask yourself the question what you think is missing on Gmod and create a community that fills that gap. Make your own community which has a self-made gamemode.