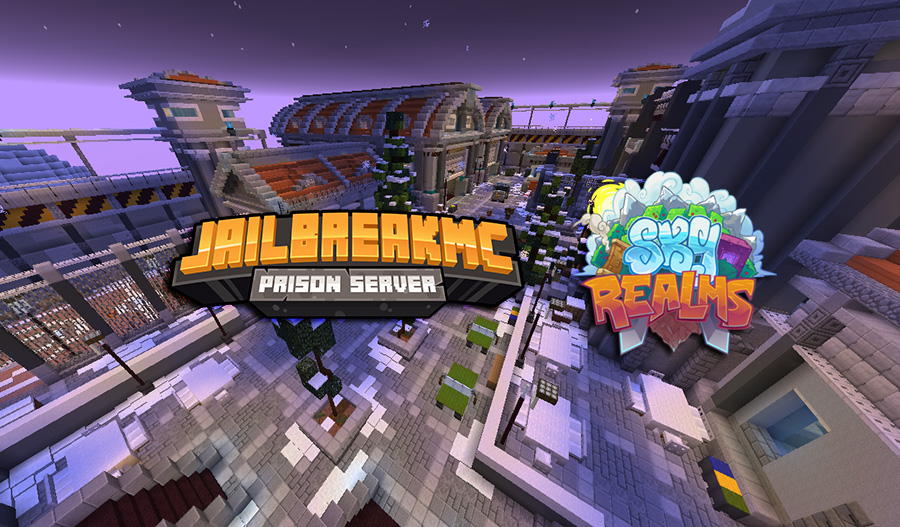 Time for another adventure into the world of Minecraft! Recently, I had a chat with PatP, owner of two heavy hitters within the Minecraft scene being JailbreakMC and SkyRealms. With two both different, and heavily populated communities, this man must have his hands full! I was eager to hear his story on both communities and his history. You know what? Let’s hear it from the man himself!

Hey PatP! Cheers for doing this interview with us. First of, how are things going?

Things are going pretty well for me. I hope you’re doing well yourself.

I’m doing great, thanks for asking. Can you tell us a bit about yourself and your communities JailbreakMC & SkyRealms?

Well, my name is Patrick. I manage Minecraft operations at DoubleJump. DoubleJump is a small gaming company based out of Victoria, Canada. Although, I myself, am a remote worker in the U.S. as I have been since the beginning.

SkyRealms is a Skyblock server that opened in March 2017. Skyblock is a pretty basic game-mode around the Minecraft space, and we thought that we could take interesting elements found in other game modes and incorporate them into a Skyblock server. So that is what we set out to do with faction & prison-like grindy elements into the server.

JailBreak is a Prison server that opened less than a year ago. It is all about showing you’re the best on the server by grinding your way to be the best player. Whether that means you horde all the really good pickaxes you can find to sell, grinding your way to the highest Prison Ward (A-F), working you way to be the richest player or just having the nicest looking cell (personal home) on the server.

Did you have any experience running a community prior to this?

Prior to SkyRealms and JailBreakMC, we had a prison server called TitanMC that opened around 2014. Sadly that server closed due to data loss and not having proper backups, but it helped us gain a large amount of knowledge about the space and make our future servers better.

What makes JailbreakMC & SkyRealms different from other servers out there?

I believe what makes JailBreakMC and SkyRealms different from most servers is how our servers are set-up and some of our unique features. Most of our servers allow for cross network interaction, so that means that a lot of items and data is actually being moved completely across servers. This allows for easier upscaling and downscaling when needed. We also introduce use of load-balancers so we hopefully get an equal amount of players on one of our game servers at a time.

With our features, we try to introduce elements to the server that haven’t been seen before, or we believe we could do better. With the way the servers are set-up, we try to make the experience as seamless for the player as possible. So that means that no matter where you are on the server, you still have the same data as you would elsewhere without you having to do anything.

Both SkyRealms and JailBreakMC have separate staff teams. It is not uncommon to see some mixing in the lower ranks such as Helper or Moderator between the two server, meaning some players may be staff on both. However, as long they are able to handle both servers and fulfill their duties, we allow them to be staff on both if they have interest.

Typically at the Owner and Admin level, that rank is shared across the servers as it’s more of a position at DoubleJump and less of a single server spot. Each server has separate Senior Moderators (step below Admin), and they are in charge of going over Helper applications and recruiting staff members. I overlook the Senior Mods & Admins to ensure they’re doing well.

Is there a (big) difference between both communities? Both the community itself and managing it.

With the different game-modes of Prison and Skyblock, you definitely get different communities. On prison servers you seem to have players that are more interested in mining while they watch something or listen to music. So you have a real grind on prison servers and the community that comes with, this can be very insightful. I say that because most play many Prison servers, so it is good to have the insight of a dedicated player like that. Be able to see what type of things those players would like to see added to the server.

With Skyblock, there is definitely a grindly element, but there is also the creative side of things on Skyblock. On SkyRealms, although they may share the same general setup on how players get their bases, players have much more space to build and play around with their realm. That is probably the thing I like the most about managing the skyblock community. I enjoy when I stumble across a build on the server that I didn’t even know existed, but it’s amazing in size and beauty.

I have always loved being able to see everything on a server from basically a birds-eye view as a server Owner. You are able to see things built up over time and see progression in both the players on the server and in some cases, outside the server. I love hearing people say how much they enjoy playing the server and some people say it got them through tough times. Obviously, there is also the reverse end of that with people shaming the server, but that comes with being online in my opinion. You have to be able to take the constructive and unconstructive criticism players provide.

Minecraft has been around for a pretty long time now. How is the game and its community holding up in 2019?

I would say in 2019 the Minecraft community as a whole is still doing surprisingly well, personally. Like you said, it’s been around for a pretty long time now, and that is definitely true. I thought that it would have slowed down more now in my personal opinion. Although you seem some decline in numbers of Java Edition Minecraft, you still have large amounts of players playing on Bedrock and Pocket Editions. I believe this is because of accessibility. With Minecraft on Windows 10, Mobile Devices and Consoles all connected, you have a large amount of players still on there because it’s easy to get into and can be picked up anywhere.

Also now, with the announcement of the game Hytale, you have a large amount of people looking forward to that game too. The game being created by Hypixel Studios, the people behind the largest Minecraft server Hypixel. I believe when that comes out, you will see a lot of people moving over from Minecraft to that game (if it doesn’t have serious issues, obviously). We currently have no plans to do anything on Hytale as there isn’t even an announcement date for the game yet. It will be interesting to see what both the Roblox & Minecraft community does when Hytale comes out.

I noticed you you have a YouTube channel with currently 28k subscribers (grats!). Any new videos in the work?

Ahhh, the good ole YouTube.. I experienced with YouTube quite some time ago, and it was fun to create videos. I stopped due to personal issues and not having very much time to make videos with a high focus on the servers. I believe I may pick it back up in the future, maybe with some content other than Minecraft, but at this time, sadly no new videos in the works for my channel. That may change though!

On the subject of videos and/or streams. Do you have a policy for Youtubers/Streamers within your servers?

For YouTubes with 5k subs or more, we give them YouTube rank as we appreciate the free promotion that comes with that. We typically ask for about 50 concurrent viewers for Twitch rank on the server. Both ranks come with their own set of perks. If someone is interested in one of these ranks, they can simply make a post on one of the servers forums.

Do your communities have its own developers? Or do you use 3rd party add-ons and/or developers?

We typically use a mix of both custom plugins made in-house by developers connected with DoubleJump as well as public plugins. All of our backend stuff had to be customised to make it work. Any features we add that we believe we can do better, we typically try to make that a custom plugin as well to be able to add features and fix bugs as we like. We also do this to integrate it into our systems for rewards and stuff along those lines.

“On SkyRealms, we will soon be hosting a Build Contest!”

I noticed you host various events within your community. What is coming up next?

On JailBreakMC we hold events every Saturday at 8PM GMT. These include various small events that grant rewards if won. Some of the events include PVP events in a last man standing style, Parkour, Hide and Seek and TNT-Runs. We typically do this on our server every week to give our players a chance to do something other than mining away. Players seem to enjoy the events. If someone wishes to join the event, they can just hop on Saturday at 8PM GMT and run /event command. You don’t need any items to participate either!

On SkyRealms, we will soon be hosting a Build Contest! This contest will be themed for Spring/Easter, and players will be given rewards for 1st, 2nd and 3rd place. This gives people with a creative side a chance to show off their skills to the server and get something for it too!

Looking back at your journey, what are your fondest memories and or achievements?

I really don’t think I can pinpoint a singular fond memory. There are too many. I would say that the hearing people’s stories and meeting some friends through the experience has been the best. I have met many people and made long lasting relationships thanks to the opportunity I was given. If I had to pinpoint a greatest achievement, it would have to be back in week one when SkyRealms had about 4,000 players on at a time. Obviously, it has changed a lot since then, but that was great to see while it lasted and something I didn’t think would happen.

Right, the final question. As always, do you have any tips you want to give to other (starting) communities out there?

If I had to give any advice to any communities starting would be just to take the leap. You never know if something will or will not work until you try it out. If you believe you can do something better and different, go for it.