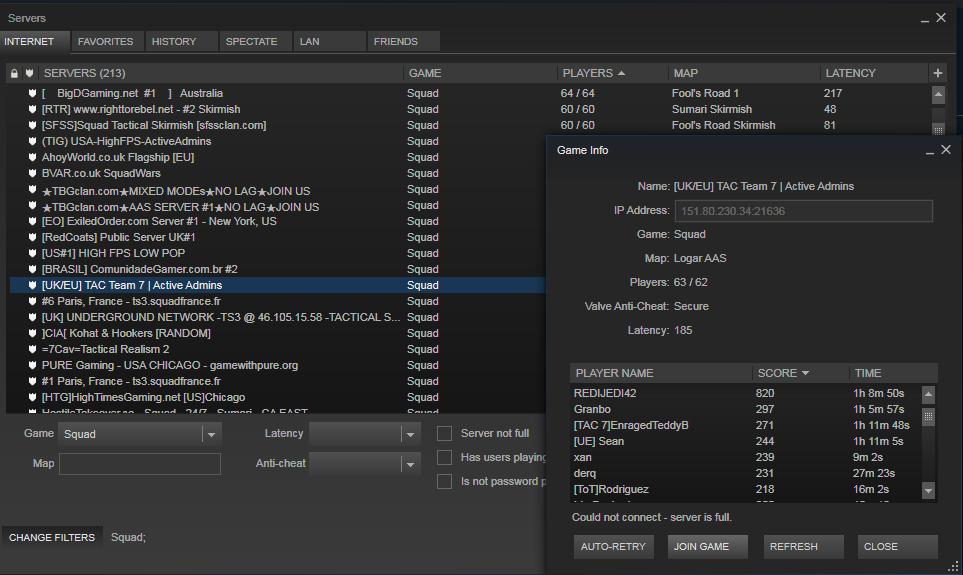 Matchmaking, a standard system for console games and an annoyance (sometimes game breaking) to PC games and its communities. This system has become the industry standard for most of the games that got released for the last couple of years. Before we delve in let’s give a quick explanation about both systems and provide a recent example.

This system that lets you hop in (and hop out) of multiplayers games as quick as possible. The way it works is that the system looks at your ping and preferences and throws you in with other players who have the same preferences and hopefully are in the same region/continent as you. Example : That big button that says “Quick Match”

Do you see a server list in the multiplayer menu? if so, then the game supports dedicated servers. Here players/communities can set up/rent their own game server and have more control over its settings. Example : Conan : Exiles

This is a combination of the two. A good example is Counter:Strike : Go, here you can play competitive (which is matchmaking) or choose from a server in the community servers list (dedicated).

Why are “older” games such as: Mount & Blade, Garry’s Mod and Minecraft (yes, I see this as an “older” game) still popular nowadays? Simply because of the communities hosting servers with unique content (and yes the games themselves are great aswell). The reason why these communities and its servers even exist is because the games support dedicated servers. What if these games only used matchmaking? Then the communities wouldn’t have formed nor would there be any modded servers. See where I’m going with this?

A really good example of how matchmaking impacts a community is Team Fortress 2. The game launched with only DS (dedicated server) support. Communities were thriving and providing a lot of homes to the players. Then later down the line Valve added matchmaking (similar to cs:go) and this deeply damaged the community scene, killing a lot of communities

Besides from a community standpoint, matchmaking also has an impact on the players. Players who connected via matchmaking have little to no connection with other players. It’s not like on games with dedicated support that you play with same people for most of the times. When I was doing some research I came across this post on Reddit by SkarlathAmon that sums it up really well:

“The idea of talking to your team and playing to each other’s strengths and weaknesses is effectively impossible in matchmaking. Also since your scores are pretty much based on individual performance, to rank high you need to play selfishly. Objective games really degrade your score if you play them for the objectives instead of playing them just to kill the people going for the objectives”

That being said, matchmaking is good for solo play but terrible for groups & communities.

There are also technical issues when it comes to matchmaking. Most of the time a player is hosting the match (this player gets chosen by the game). This means if the player has a poor internet connection everyone will suffer from it. Besides that the host has advantages due to the low ping and better be now leave in the middle of the game else the game will have to find a new host (which most of the time doesn’t go smoothly). Also don’t forget the “infected lobbies” in COD:MW2…

Just think of a game you really enjoyed playing in Multiplayer. A game that I enjoyed a lot was Red Faction: Guerrilla. To this day I get some friends together and start a match with sledgehammers only and let the mayhem unfold. What if the game supported dedicated servers and this could be a legitimate thing… what if..

A message to developers and publishers: Please support dedicated servers! This will give your game a longer lifespan and grow your community/fanbase.