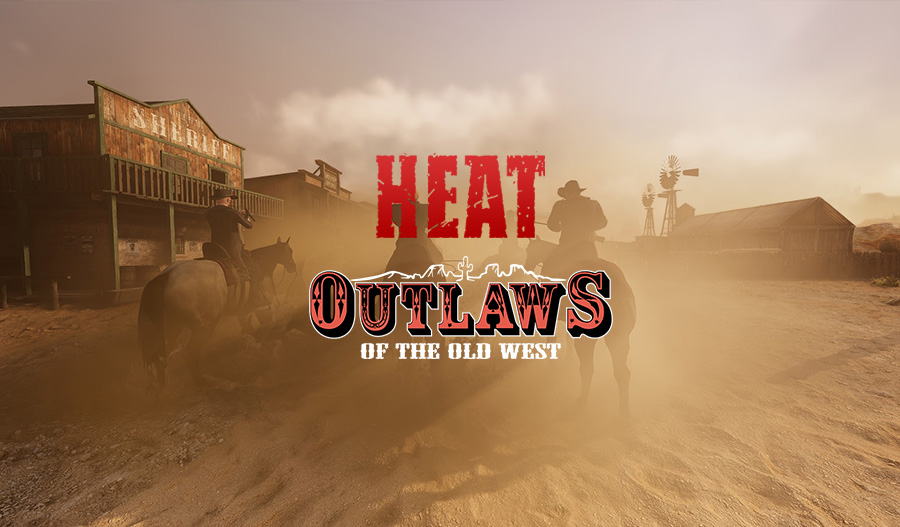 As an ex Reign of Kings player I’ve been playing Heat these last couple of days (shout out to the Kingdom RP/PVP server). although Heat is mostly copy pasted from Reign of Kings when it comes to mechanics, it offers a fun twist on the survival genre. During a voice chat on Discord yesterday I heard people talking about a new bandit in town named “Outlaws of the Old West”. Is this going to be a fast draw duel outside of the saloon between both games? Let’s take a quick look at both games and see what we can find out.

Before we take a look at the game, we first need to see who is working on it. As mentioned before, this game is being developed by Code}{atch, the team who previously made Reign of Kings and StarForge. Both of which never felt finished according to the community on their Steam community hubs. Personally, I have great memories of Reign of Kings (RoK) and the roleplay server we hosted at the time. When it comes to StarForge.. yeah, let’s not shall we?

The description of Heat opens with the line “Welcome to America”. survive the wilderness, establish yourself, raise a family and dominate the land. Gain power as President (much like the king role in RoK), deliver justice as Sheriff, fight for your tribe as Chief or show some southern hospitality as Governor.

Unlike RoK’s building system which was based around placing blocks, Heat works much like rust with its building plan + hammer combination. Besides your average resource collecting and accompanied tools & weapons (axe, pickaxe, firearms and melee weapons), the game works via a construction tree where you need to unlock patterns and recipes. When it comes to creating a family, I haven’t been able to test this feature.

Outlaws of the Old West

Made by the team over at Virtual Basement LLC, known for their other game ARK: Survival Evolved, this game came out of nowhere for me. Since it only got released yesterday I haven’t been able to try it out myself, so all information is thanks to streams and the steam community. I mean, who needs journalists/reviewers when you can just pay some streamers to promote your game right? (this is not an accusation).

After looking at some of these streams I noticed that both games are VERY similar. Both have the exact same setting, have the usual early access bugs and allows for some good roleplay. It looked like this game had more items to craft much like it’s building system. As an idiot roleplayer, this is something that appeals to me.

If you are playing this game, please let me know what your experiences have been so far. Would love to hear them!

So, both games are being developed by teams who are known for creating games with bugs. That’s a great way to start isn’t it? All jokes aside, the fact that both games are in (very) early access should only be a good thing for us players. Expect more content being added and hopefully, different experiences when comparing the games. First they both need to work on making the games have better performance. Especially Outlaws of the Old West from what I am hearing & seeing. By now all of us have learned to lower our expectations from early access games right?

Knowing Virtual Basement LLC, they will probably have a bigger focus on taming animals and use it for combat (ARK principle) where Heat focuses on the Seats of Power elemt (RoK principle). Time will eventually tell. Also, if Outlaws of the old West gets a 60 bucks price tag in the future, I will piss my pants btw. Don’t pull another Ark!

Which game gets the most “views”

This will most likely be Outlaws of the Old West due to its studio and influence. This can go two ways. It can either become a fairly trending game on Twitch for a while, or its going to tank due to its bugs and poor performance.

Someone linked a Outlaws stream yesterday on Discord. The first thing that I saw when I tuned in was some guy in long johnsons getting shot multiple times at point blank without getting any damage. Then I tabbed back in to Heat to refill my furnace and admire the forest. What a great evening it was..

If one game gets more exposure on platforms such as Twitch, that doesn’t mean the battle is over. If there is a race between two similair games, all eyes are on both games for a good while before people place their final bet.

As mentioned earlier, the topic of content creators having lots of power within the gaming industry is fairly new. This is something we will be talking about in the future, as a stand alone article. This influence also counts for communities out there. Having a big streamer on your server can make or break your community.

Both games can offer your community a new adventure, that is if you can handle the known early access bugs. For now I will keep playing Heat and keep a close eye on Outlaws of the Old West. During the weekend I might give that game a try and perhaps write a follow up article going more in depth after putting some hours into both of them.

Heat
Outlaws of the Old West