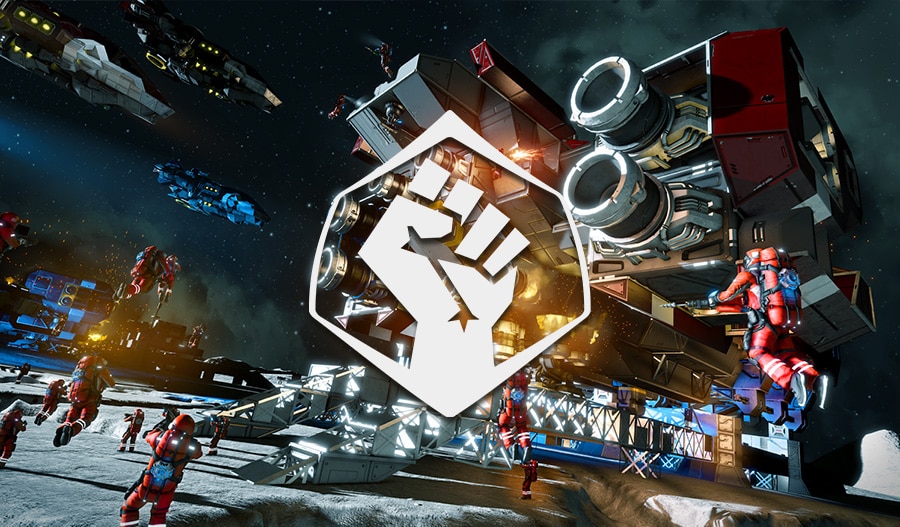 Suit up engineers, we’re off to the stars! I recently I had a chat with Tim, project owner of Rebels-Games. His custom modded Space Engineers project launched back in 2015 and offers a unique twist on the game. Their universe consists of three planets and moons on each, where the gravity and ore amounts depend on it size. Besides that there is one special planet called “Dead Sun” with the rarest ores for most advanced blocks. The world of communities within Space Engineers is quite alien to me, so I am eager to hear his story. A space odyssey. Alright, no more puns.

Greetings Tim! Thanks for doing this interview with us. First of, how are you doing?

Hey there!, thank you for inviting me to the interview!

I’m fine! Thanks for asking. I’ve been quite busy these last 2 weeks, since we are working on a new project which we want to implement in our server. I can’t say anything more, TOP SECRET 🙂

Can you tell us a bit about yourself and the Rebels Games project?

My name is Karol, I’m from Poland. What I do in common days? I’m a delivery driver but after work I do skateboarding and helping the polish community of Space Engineers.

Why Space Engineers?, because I’m fascinated about this game since my friend (who actually never played it) recommended it to me. SE offers a lot possibilities for the creative minds and the modding community.

During my first 600 hours I spend on single player mode before I decided to join a multiplayer server. My first choice was on “ImperiumSE”. I spent enough time on it that I became a administrator. Unfortunately due to the lack of understanding between me and server owner, I was forced to leave. Since I still was a big fan of the game, I decided to found my own server and run it in my own way, as I do now.

What makes your server different from a standard Space Engineers server?

The content of our server has high priority. The mods we are using are 100% made by us from scratch. That make us unique compared to other SE servers. We still have a lot of a new ideas which we want to introduce to our server. Another thing which make our server so different is that we offer support 24/7 in various languages like: EN, RU and FR.

For the record, this mentioned “Dead Sun”. Is this a PVP hotspot due to the rare ores?

Not really. On/around the Dead Sun, its hard to survive. The place is only visited by brave players who trying to get more rich than they already are. Also, this “object” is not completely dead. You see, when you visit this place, you and objects around you, will receive damage over time. In a condition like this, PVP might be very hard.

I haven’t launched Space Engineers in a long while. How is the game and its community doing anno 2019?

The game has changed completely since its launch. All irritating bugs, lack of stability and high computer requirements are a thing of the past. Singleplayer and multiplayer finally run fluently. Because of the SE fans and moderators, the game has been able to make it through some rough times.

Say I join your server for the first time. What can I expect?

It depends on how experienced you are. If you are a new player, the GUI of the blocks shouldn’t be so hard to understand. All other uncommon blocks are kept in the “vanilla” style which makes you learn new mechanics more easier. We regulary improve the balance of all the components and we put a big emphasis on energy management to make the game more enjoyable.

Let’s talk about development real quick. You guys are running with both custom mods and models, impressive. What kind of content are we talking about?

We got the talented modder Archan79. We made new custom starting ships, cargo holds, drills, turrets, refineries, new components and much more. I would like to tell you more, but that just spoils the fun.

What are you guys currently working on besides balancing?

We are still improving the mechanics on the server. We are currently planning new elements which we want to add soon.

One of the biggest upcoming changes will be the mission system. It will allow any player do a random mission with stages and each mission will have a unique scenario. Also, we want to improve the server stability by adding mechanisms which allow move between servers.

Do you have any tips for starting developers who would like to start modding?

Willingness and enthusiasm, honestly. If you want to start modding, you need those a lot. Nowadays, a lot of tutorials can be found on the internet. You shouldn’t have difficulties finding it. You can also try to change existing mods and see what will happen, but its a long way to understand how it actually works.

Over these past four years you must have accumulated a lot of memories. What are some of your fondest memories?

My first contact with another players was the best thing really. Building our first base with 8 players where you work on the same project is something beautiful.

As always, do you have any tips for (starting) communities out there?

You will definitely run into difficulties, but you have to be persistent and slowly head for the goal. Heads up, each problem has a solution, you just have to find it. All what I have to say is good luck, and make sure you got a right tools for the job 🙂