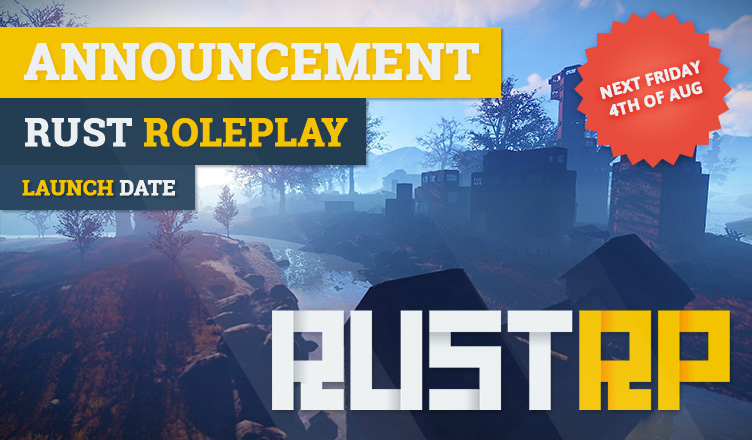 After busy 2 weeks of working on the server, it’s safe to set a date for the release! Over the time some things have been changed here and there (thanks for the feedback & suggestions, keep em coming!) and we are in the final stage. “So when can we play?” well the featured image probably already spoiled that but it might be even sooner!

We set the date to the 4th of August (upcoming Friday). This leaves us with more than enough time for tweaking and testing. If it all goes according to plan and the upcoming Rust update is (relative) small one, we might be able to launch a day sooner after the game update! But for now, just stick to Friday the 4th. Here is a countdown, keep in mind that we are aiming to go live around 7.

Some important changes that have been made: We removed the “Hostile Zone” due to it being a pain in the ass to administrate and we found some exploits, added more rewards for joining the steam group (Sign artist, RP Points, Offline raid protection and a fancy name colour) and we have a (semi) clear vision on what the in-game economy will look like (keeping the balance). Rest assured that we still won’t have donation kits which will break the economy. Better yet, there are no donation kits. We do have a different reward for donating which we will present when the time is right.

Yesterday we opened the RustRP forum which is growing (be sure to register, we can use all the feedback we can get and would love to meet you all!), after some hiccups (subdomains & cookies don’t like each other) there shouldn’t be a problem with signing in & out anymore.

If you have any questions, suggestions, feedback or just want to chat, be sure to join us on the forums. For now we will be going back into our bunker and keep on working!

As always, this article is subject to change

Founder of Angry-Mob.com. Keeping your game community up-to-date with articles, guides, interviews & more! Damn.. what else do I put in here?!