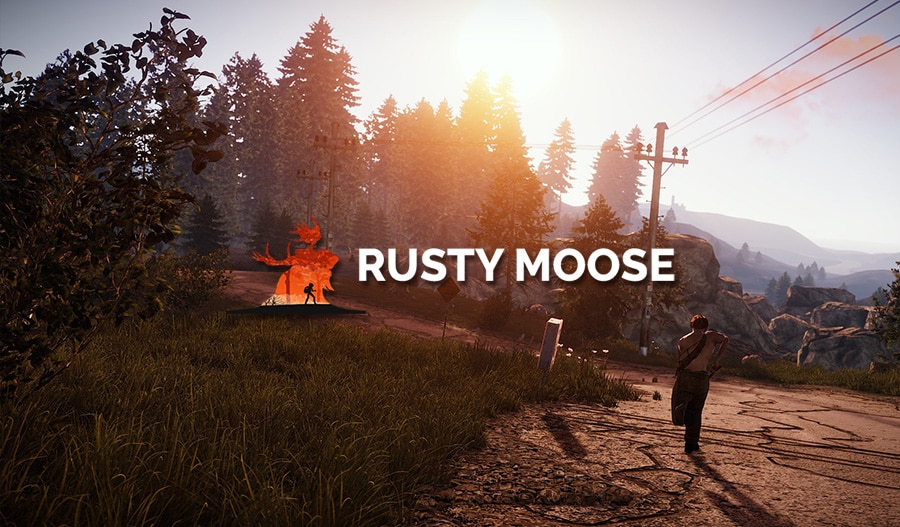 Two Rust interviews within one week, you kidding me? Yes sir! And guess what? This one has a twist! And no, I am not talking about the interviewee. Like our previous interview, this community is also listed under the official tab but Errn, “Boss” of Rusty Moose, is also part of the Rust/Facepunch support team! The first thing that came to mind when I saw she was part of the Facepunch team besides Rusty Moose (we know how demanding that can be), was the amount of work she must have on her plate (besides me hoping to increase my chances of getting a S&box beta key). What started as a fun server during Legacy Rust resulted in them getting official status back in 2016. Fast forward to today, Rusty Moose is one of the main communities of Rust. Impressive!

Heya Errn! How are things going?

What can you tell us about yourself and Rusty Moose

Friend and I, just after Legacy got put down, started up a little 30 pop Experimental branch server just to have a place to derp around in and it just kind of grew from there. He got into real life stuff and stepped away from the Rust scene. I, however, went ham. 5 years later that 30 pop server is now ~350 pop and has 6 other brother and sister servers! Been a wild ride and I don’t have too much free time but I have a passion for the game and seeing it flourish. I like to make chick-fil-a’s I’m a roleplayer at heart.

Also, fun fact: Rusty Moose was called the “Rusty Pickle” for roughly the 1st week of its life.

You seem to be busy! Besides running Rusty Moose, you are also part of the Facepunch/Rust support team. Can you give us a little insight in what your average day looks like?

Hmm, none are really quite the same but I’d say the avg day is mostly:  Wake up >> make coffee >> start answering the 37 DMs I got while I slept (mostly cheater reports or “my game won’t launch”) >> guzzle coffee >> chat with the team about random stuff or any patterns in the support tickets that may need addressing >> take my dog for a walk >> answer the 13 DMs I got while taking the dog out >> somewhere a server crashed so I need to start it back up >> try and get a game of Overwatch in >> ban a couple of Rust cheaters >> now I can eat breakfast.

Was pretty long-winded, but you get the idea. Just a hodge podge of everything on and off all day. This pattern sustains itself right till I go to bed.

“Rusty Moose was called the “Rusty Pickle” for roughly the 1st week of its life.”

Did you have any community experience prior to Rusty Moose?

I actually didn’t. It was something I cultivated on my own out of nowhere, really. Prior to Rust servers or even being part of the Facepunch team I was a super boring Insurance agent. Learned how to do the server stuff through trial and error (and Alistair’s help) over the years and got to a point where it all becomes second nature. When I started this server “project” I never, in a million years, envisioned we’d have a 10k+ player community out of it.  It’s both a blessing and a curse given the nature of the game and how toxic some of the community can be. Just have to keep your eye on the prize (whatever that may be) and not let the trolls get to you.

What makes Rusty Moose different from other (official) servers out there?

In the grand scheme of things it’s just another server to log into. I’d like to think what sets us apart is our constant strive to keep the community in check. We don’t allow racism or overly toxic players to just spam whatever they want in chat. I do have a genuine interest in making it as least toxic as possible. I have a great admin team all well-versed in Rust. I think combined we all have around 50k hours played. Sure we all troll once in a while, you have to have fun to stay sane. 🙂 We also do a purge-like “Boom Boom Party” once a month (night before a Blueprint wipe) where we give out kits for everyone to blow each-other up then we do a fireworks show at the end of the night. I stream it all as well so even if people can’t log in they can still be there.

How did you become an official rust server?

They came to me and offered it. It was before I was part of the FP team so there was no correlation there. I just ran my servers the best way I saw fit. They recognized that. Knew I was in it for my passion of the game and not some personal agenda. Knew admin abuse wouldn’t be a problem. I remember getting the message from Helk I was like a little giddy school girl. I didn’t actually believe it was him I thought someone was trolling me. I remember telling him to “identify yourself!” lol..man I was such a noob.

Were there any specific tasks you had to undertake before getting the status?

Not really no, was just a couple years of “not being a crappy admin”. I was always helpful with providing bug reports and how they can be reproduced.

Since February Rusty Moose branched out to the EU by opening a new server. How has this been going so far?

Been going great! I didn’t expect it to take off as well as it did but it’s one of our best performing servers now in terms of player count not dying off after a couple days/weeks.  We’re actually discussing opening up another smaller EU server based off the demands. But we’ll see 🙂

Do you notice a difference between EU and NA players when it comes to playstyle and community engagement?

EU server feels a little less needy to me haha! Maybe it’s just due to it being one single server at the moment and we have 6 more NA ones so they feel a little more high maintenance.

With all those servers and players moderation can be demanding I take it. Can you tell us a bit about the Rusty Moose staff team?

I literally have the best admins. Anyone that doesn’t believe me can 1v1 me on ctags. lol?

But no, real talk. As we’ve grown I went from me doing 1-2 servers alone to 7 servers with 5 admin and 3 discord mods. I don’t open applications for admin. I’ve always just “people watched” and see who’s sane. Who’s helpful even they don’t have to be. 100% of my staff have been around my servers for years. I hand picked them out of the crowd and offered them a spot if they wanted to answer the call. I couldn’t do it without them.

Besides the fairly new (EU) server, what are you guys currently working on?

We always joke about opening a Minecraft server…

Looking back over the years I can imagine you have some great/fun stories to tell. You care to share one/some of them with us?

People like to dog on the Rust community and how toxic it is. I mean, it is very toxic, don’t get me wrong….but these same people have amazing hearts and are still human when you get to the nitty gritty of things. The community gets together every year for a charity event Rustafied hosts.  People come together for the greater cause and donate. They share stories. They tell us how Rust has changed their lives for the better. They celebrate marriage with someone they met in Rust. They have flourishing Youtube channels because of Rust. They’ve stepped out of their social comfort zones. In a society where positive feedback is a rare commodity it’s great to bring everyone together even if it’s only once a year.

Couple years ago Helk got sick and was in the hospital. We did a little impromptu event on one of my servers to make him a giant get-well-soon card. The turnout was amazing given the short notice. Hundreds of players showed up to write on a giant wall wishing him well.  It was 10/10. We made a video on it and sent it to him. I may have actually teared up over this one!

Before we go to the last question, any wine tips for us? I noticed you are the local wine connoisseur 😉

I actually drink Franzia so….you don’t want any advice from me 😛

As always, do you have any tips you would like to give to other (starting) communities out there?

Just be consistent! No one likes an unpredictable admin. Don’t keep wiping your server in hopes it will attract new players because you will only drive away the loyal ones that genuinely enjoy the server. Don’t take anything personally. Rust players can be mean, just brush it off. WHENS WHIP??