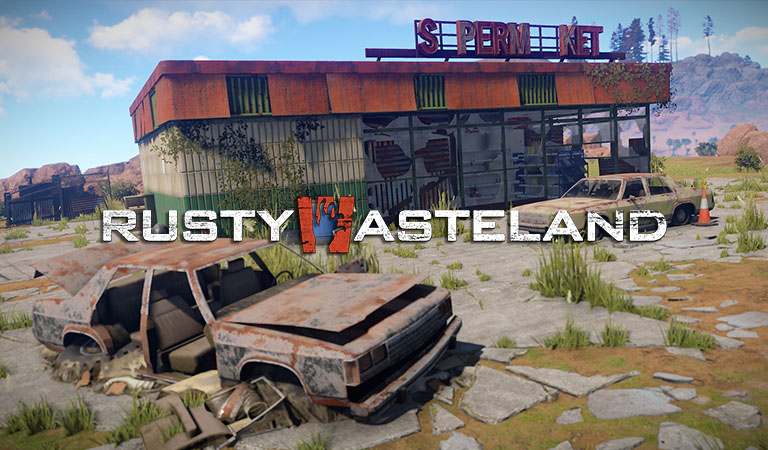 Last week we were introduced to the new modular turrets within Rust. This made me have a peek into the community once again and see how things are going. The first thing that caught my eye was the Rusty Wasteland community. Their journey started back in August 2017 when they decided to open a server just for fun to play around with one simple goal: To create a friendly community and a strong connection between players and staff. It’s easy to say that that goal has been achieved! I managed to have a little chat with Carol, one of the two owners of Rusty Wasteland. Let’s set the turret and get out of sight ASAP!

Greetings Carol! First of all, how’s it going?

Hello! I’m doing great! I hope the same goes for you 🙂

So am I, thanks for asking! What can you tell us about yourself and the Rusty Wasteland community?

I’m a young lady married to the other co-owner MM617. Rusty Wasteland popped up as an idea nearly three years ago as a fun project and since then it grew into a big & great community full of helpful people. However, this is a PVE server so killing and raiding is disabled and we are really keen on some of the rules such as “respect each other”. We treat every player on the same level regardless their religion or sexual orientation. Everyone finds their place in the family.

Your servers are doing pretty great, grats! What makes the Rusty Wasteland servers stand out?

I think I don’t need to be scared to say – our hospitality, friendliness and openness. We always try to make each player feeling welcome and like in a family, be honest and open about anything. We’ve got tons of great plugins which are the first of its kind. Nowadays more and more servers are naturally getting them as well, however we were the first ones having different levels of Patrol helicopters, Bradley APC, locks to person etc. Our developer has endless ideas and amazing skills and our staff team is full of fun and friendly people.

Have you been part of other communities prior to Rusty Wasteland?

Rusty Wasteland is our only community. I had completely zero experiences with handling communities or a game server whatsoever back then but it gave me so many experiences which I will never find just like that anywhere. It’s like raising up your first kid and being incredibly proud of it.

Seeing Rust is a PVP focused game how does PVE work for (new) players?

Killing and Raiding is disabled and everything is locked to the owners, to make sure that nothing can be stolen. Many people are confused in the beginning, but we have bunch of PVP’ers who actually come to relax to us as they get sick of being killed and raided over and over again. We have some fun events which include also the raid or killing but all is monitored and you rather gain from it than lose. You can focus much more on surviving the environment than protecting your loot/base or yourself against other players

“Killing and Raiding is disabled and everything is locked to the owners, to make sure that nothing can be stolen”

When I see PVE I think of possibilities for the community to roleplay. Correct?

Depends on what are you seeking. We indeed had groups of roleplayers and it was fun if you met them by accident and actually became part of their game. I’ve met thousands of different players within the time of Rusty Wasteland and each of them had a slightly different approach to the PVE aspect. In the end we all have the same in common – gathering, being creative with building, attending fun events but especially having fun, chilling and making new friends.

Looking at the rate of new additions to the game, what is something you are looking forward to, and what would you like to see added to Rust in the near future?

I think everyone is super excited about seeing the modular vehicles to be implemented! Players love the transportation as it is quicker for them to travel through the map and I think it will be lots of fun. Personally, I look forward to when Rust gets the best out of the performance, so that also players with weak computers can enjoy playing as well. Cheers to Facepunch for their great job!

We’ve got Staff and Assistants.

Assistants are junior members who are in training, learn the way how do we handle the situations, but also learn basic commands etc. I think usually you find them on other servers as moderators.

Staff are behind the scenes divided into two categories as they gain higher permissions gradually. We never throw all rights at anyone at once but let them slowly build up everything up.
We have burned our hands really badly with some of the former members who we trusted really deeply, so we are much more cautious by now.

Furthermore our team includes also our own Developer and Map creator/prefaber.

Are players able to become part of the staff team?

Of course! But not everyone due the age limitation and previous ban history. Sometimes we hand pick the staff when we see really helpful players. You can already feel if the person will be a good help and has the potential or not. Besides that there is always a staff application open on our website.

Right, what are you guys currently working on? 🙂

Fixing up anything that broke during the last forced update haha! We are trying to polish some of the current plugins to make them more performance friendly. I don’t want to reveal too many details of course. There are still many ideas on the table including some personal events. All I can say is that it might include some raiding, some killing… everyone will find out once the time comes! 🙂

Do you guys host special events within the community? If so, what kind of events are we talking about?

We used to host many more of them and we are slowly getting back into that again. Events are usually really intense especially for the staff. After the summer period, when everyone is back to university or work, it becomes more difficult to host them on the daily basis.

I bet you’ve gathered some great memories during your adventure with Rusty Wasteland. Any stories you want to share with us?

There are definitely countless memories! We’ve had so much fun and laughed a lot. I still remember one of players chasing others in a car with a police siren screeching through his microphone and stopping them to ask why they didn’t wear matching shoes and so on. It was hilarious! We have also experienced multiple in-game weddings! Any time we do a climb/parkour tower (which is by now called Tower of Screams), there is so much going on. Our community is full of fun and it’s really difficult to pick only one memory or the best one 🙂

As always, are there any tips you feel like sharing to other (starting) communities out there?

Tons of patience and dedication. Don’t be disappointed if you don’t see the result instantly. Set yourself rather smaller goals in small steps. Be open to your players and don’t be scared to admit your mistakes.